August Challenges - a rather long summary post mostly of #clairestelle8august

So here we go with the August challenges. A bit different to my usual format, it will be a long post with just a few words between the pictures, and only one picture per mani (or maybe 2)

So I started with Golden Rose Holiday 77, which was one of the 8 textured polishes I bought in Turkey, and huge thanks to my lovely friend Iva who told me about them!!
The first challenge was Gradient so I did a gradient with Golden Rose Holiday 77 and 79, stunning textures!
The next challenge was Hawaiian, so I stamped Vivid Lacquer VL014 with Kleancolor Neon Sapphire over my gradient. This wasn't a huge success but since I hadn't top coated the textured gradient I had no choice but to run with it.

Then I added some cute dragonflies from Vivid Lacquer VL014 with Hit the Bottle Snowed Under
And then I added topcoat! the white seems to melt into the blue and I really liked what I ended up with!
The next challenge was Aztec and I used Apipila 09 and Kleancolor Madly Black over Polished by KPT Swimming with Mermaids. Swimming with Mermaids is a thermal so you'll need a quick shot of that in its transition phase - it's beautiful! and then the Azetc stamping. 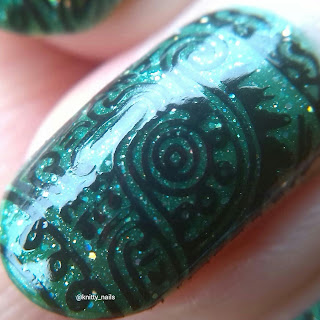 The next challnge was Green, so slightly in the wrong order here is the base of the Aztec mani, the beautiful Swimming with Mermaids in its cold stage.
The next mani was really just an addition to the Aztec theme. I used the same Apipila plate and Essence Stampy 001 to add some white stamping. The image was quite small but I wanted to cover the nail so I had a go at sort of rolling the image onto the nail so it stretched a bit - that needs some practice!
The next mani I did was another green one - such a lovely green with fine blue particles - and it applied like a dream.
The next challenge was Beach Towel and I did this in two stages - firstly stamping stripes with Lealac LLC A, Kleancolor Concrete Gray and Hit the Bottle Purple Reign over the Kaleidoscope mani.
For the second stage, inspired by my daughter's beach towel, I stamped with A England Lancelot and Apipila Super Plate B.
The next challenge was Triangles - I was quite surprised how few plates I had with triangles on - I love this one though - Messy Mansion Leadlight Lacquer A06 stamped with Hit the Bottle Snowed Under - and yes, I stamped this on top of the beach towel mani.
Then there was Birds - I was thinking owls for this one but I saw Deliciate Nails do these gorgeous peacocks and I just had to do them too! I used the beautiful peacock plate from Emily de Molly EDM04 and A England Proserpine over China Glaze Daisy Know My Name and Leighton Denny Funky Town. 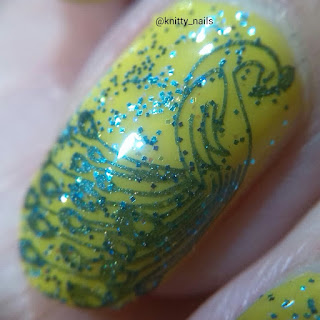 Then there was Palm Trees, and although I don't really like yellow, I rather liked the yellow and blue combo under the peacocks, so I took a chance and carefully removed most of the stamped layer. I then added a gradient of A Enland Gloriana, A England Proserpine and China Glaze Daisy Know My Name. This was a pretty bright combo but I think it made a good background for the palm trees on UberChic Beauty UC 2-03 which I stamped with Kleancolor Madly Black. 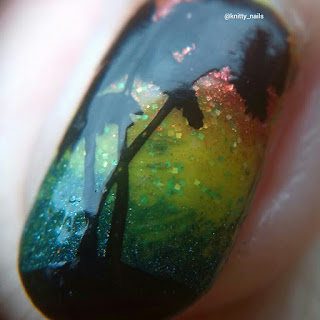 The final August challenge was Carnival. I wasn't sure what to do and in the end I decided I'd do fireworks because you do have fireworks after carnivals, don't you.  I don't have any firework plates so you have to use your imagination a bit.
I started with Moyou London Artist 04 and SV by Sparkly Vernis Gilded Lemon Drops over Colors by Llarowe Aubergine Dreams and then added 2 True Pro Metallica Athena with an un-named Ebay plate - the image is actually a dandelion I think but it could be a firework!

And then  I added some glitter with Avon Magic Effects Tassled Trim, this looked very pretty and sparkly in really life! 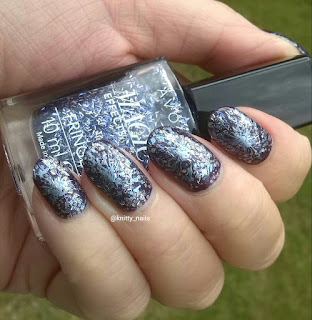