I have combined Fall Gradient for #30daysof colourchallenge and Pumpkins for #clairestelle8oct.
I started with the base of Jacava Shawfield Street and then I used the Jacava and OPI Skyfall to do my gradient. I decided to keep away from the more yellow shades for this gradient, not least because I was stamping pumpkins later and I wanted a reasonable contrast, but also because I think for a gradient sometimes its nice to just use two quite contrasting colours - in this case dark sage green and deep dark red.
I was pleased with my gradient - I didn't spend too long going for a really smooth one, but I was disappointed that it was raining when I was done so I was limited with choices for taking pictures.
Then I added the pumpkins. I had decided to use Colour Alike Scary Pumpkin and Esmaltes da Kelly Bee with my only pumpkin image, Cici&sisi 10, but then after doing the right hand, I got all nervous and wondered if the yellow was too yellow. On the left hand I switched  Bee for Virtuous Polish Glory, and I deliberately did not clean the plate after each orange stamp so the golden yellow stamping picked up a bit of orange too - it's a more subtle look but even now I still can't decide which I like best!
I am blaming my indecision on a slightly woolly head caused by the most stupid cold that is lingering well into its second week. I am also undecided on whether the matte or glossy finish is nicer - to be honest I really like all the versions - I need more days to wear all the options!!!
I'll be interested to see what the Instagram response is as you really get a feel for what people like and don't like :). 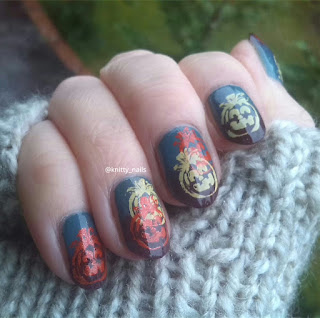 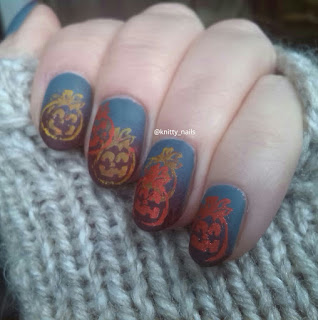 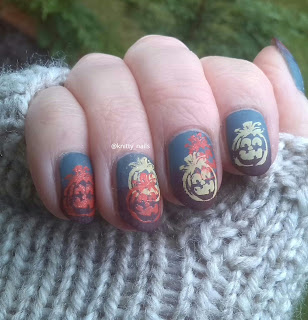 An InLinkz Link-up
Posted by debbie jarman at 23:45