This week's prompt was Halloween with negative space.
I messed up a bit with my planning here as I did a 3 step gel at the beginning of the week and have every intention of making it last 2 weeks! Luckily it was a nude colour so I am hoping I'll get away with it!
I chose the "Scream" image from Beauty Big Bang 03 as I thought it would work well with negative space. It is also doubling up for a #clairestelle8halloween prompt, my favourite Halloween movie.
(it isn't my favourite but I could only think of 2 that I have seen and other one wouldn't work with negative space)
I stamped with A England Camelot. I maybe should have used a proper stamping polish for a blacker background and a slightly cleaner stamped image but I quite like the soft black look. 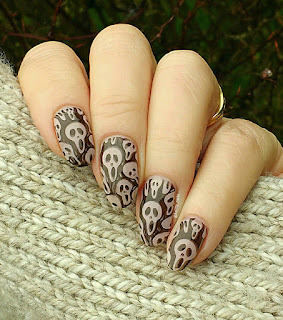 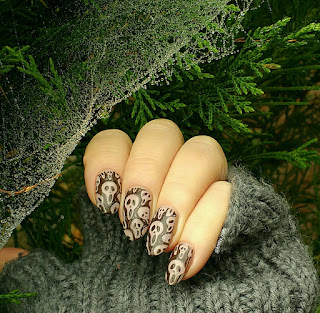 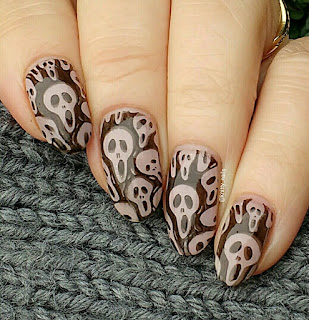 An InLinkz Link-up
Posted by debbie jarman at 08:26 2 comments:

The final prompt for the last series of Nail Crazies Unite was Vampy Matte.
I used one of my oldest polishes as the base, OPI Lincoln Park After Dark. Although I think most dark polishes are vampy, I do think a dark red or a dark purple are super vampy.
I stamped with Dixie Plates DP09 and A England Shall be my Queen.
At the moment I have one hand matte and one hand glossy and I still can't quite decide which I like best! 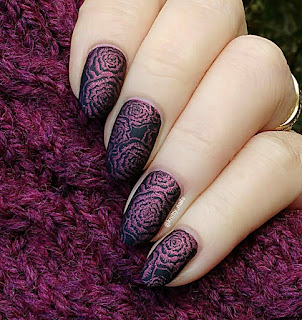 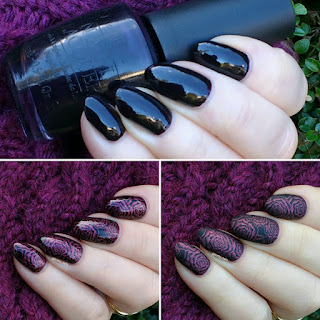 An InLinkz Link-up
Posted by debbie jarman at 11:37 2 comments:

Email ThisBlogThis!Share to TwitterShare to FacebookShare to Pinterest
Labels: A England Shall Be My Queen, Dixie Plate DP09, OPI Lincoln Park After Dark

And we're back... Well I know I said it was the last one, but after a few changes around, the admins decided to keep going and I'm not very good at saying no so I'll keep going too. I'll just try to get less stressed about the deadlines.
Anyway, we opened the new year of challenges with Friday the 13th, as they are not that common and therefore not to missed.
And for me, the opportunity to use one of my favourite polishes is also not to be missed, Above the Curve Friday the 13th (the original one!). This is a dark brown holo, just gorgeous!
Traditionally this is an unlucky day so I decided to offset the unluckiness with lucky black cats, but clearly I have had to cheat, They are very dark brown cats, but anyone who has seen a black cat in the sun will know they often have brown, or even orangey undertones in their fur and that is my justification for the cheat!!
I used Messy Mansion MM50 and A England Carnation Lily Lily Rose to add the cute kitties. 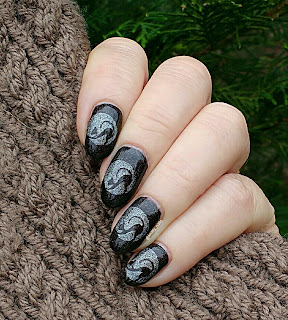 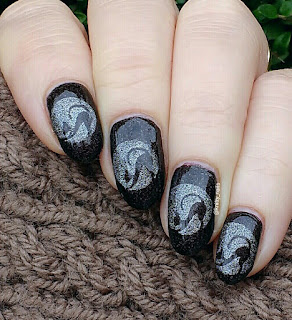 An InLinkz Link-up
Posted by debbie jarman at 01:06 2 comments:

This week's prompt was Sugar Skulls. I have 2 sugar skull plates both with quite large images but unfortunately I cut my nails 2 days before doing this mani - complete failure to think ahead!!
I do have a stamper that shrinks images so then it was a debate between shrink the image or use the clear stamper to neatly place the image. I went for the clear stamper and hoped to get enough image on the nail.
I uses Pet'la Cavaleras with A England Camelot over a base of Polished by Leanne Purity. Purity is a lovely white with a hint of shimmer (a bit camera shy when I took these pictures but nicer than just a plain white)
Then I coloured the images in with Sharpies.
They do look a bit abstract, not sure you would think "sugar skulls" if it didn't say that in the title but I did think they looked pretty. 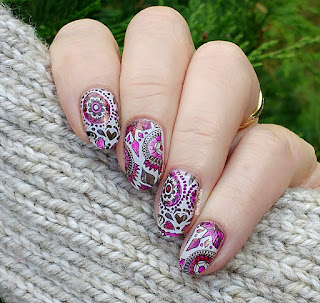 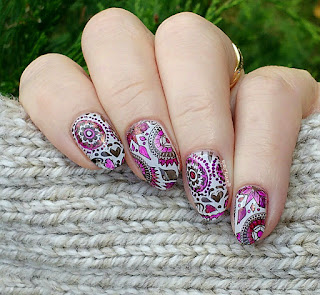 An InLinkz Link-up
Posted by debbie jarman at 23:43 4 comments: