Continuing to review the products Born Pretty (Amazon Store) sent me for review, these are chrome stamping polishes - the Universe Series.
There were 3 in the set I received, available here.
The individual polishes are BPU 01 Leo, BPU 02 Galactic Centre and BPU 03 Pink Planet.
These polishes all stamped really well and I tested each of them over black and white. Although they stamped well over white they were quite subtle, the contrast over a dark base was much better and the full chrome nature of each polish was much more evident.
BPU 01 Leo is a gold to green, with gold being the prominent colour, BPU 02 Galactic Centre green to blue, green being more apparent and BPU 03 Pink Planet I would say pink to gold but mostly a beautiful rose gold.
I used a clear jelly stamper to test them as that seems to be the most fickle of my stampers and therefore the toughest test. I used Born Pretty plates BPL005 and BPL029.
I also stamped them over the Born Pretty Pearl Lustre polishes (over a black base) and that gave a nice effect.
This following pictures are over white - BPU 01 Leo in the first shot and the BPU 02 and 03 Galactic Cente and Pink Planet in the second. As you can see, clear stamping but subtle.

These are the photos over the Pearl Lustre polishes. I tried all 3 polishes over Pearl Lustre Moonstone, the blue shimmer. (Pink Planet on index and little finger, Galactic Centre on midde finger and Leo on ring finger)
Then I used Pink Planet over Lotus in Moonlight, the pinky red shimmer

Then Galactic Center over Jade Sky
And finally Leo over Only You.
The polishes looked pretty over the Pearl Lustres but they were most impressive over black. I also painted a full nail with each so show the multichrome effect.
BPU 01 Leo and  BPU 02 Galactic Center.
BPU 03 Pink Planet

Overall I really like these polishes. Of the 3 sets I have reviewed these are my favourite.

Today I am reviewing Holographic Stamping Polishes sent to me by Born Pretty (Amazon Store)
There are 5 polishes in the set. They don't have names, just a number - 01 Silver, 02 Pink, 03 Red, 04 Blue and 05 Black
These are all very pretty polishes, lovely colours but not very pigmented so their use is slightly limited in terms of base colours you could use them over.
I tested them over black and white. They all stamped well but the contrast is not great.
All stamped nicely over white but the results were subtle and the silver barely visible. Not a problem for the coloured holos, you don't always want a full-on contrast mani and the stamping over white was pretty and delicate.
They did all stamp nicely over black too but the colour was pretty much lost. The silver stamped quite clearly but the other 4 showed very little more colour than the silver. The holo was pretty and although my photos aren't great I would certainly use them again, where I wanted holo stamping and wasn't concerned about the colour pay-off. 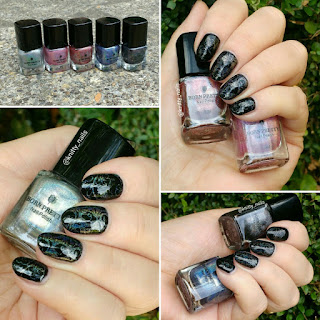 Born Pretty (Amazon Store) sent me some products to review, and then I got really busy at work so they sat for weeks in a box, just waiting! Finally, I got a chance to have a play.
The first products I am reviewing are a set of 5 iridescent polishes, available here https://www.amazon.com/Mermaid-Transparent-Glimmer-Lacquer-Manicure/dp/B074P2VY9F
I read some reviews by other users and it was clear these polishes are quite subtle used on their own or over a pale base. I tried them over white and could barely see a difference and in the bottle they do all look the same. However, put them over a dark base and they completely come alive!
I started with a black gel base so I could swatch them and play around with them without having to reapply a base.
I don't think the products are available individually but the set I received had product numbers P001, P002, P003, P004 and P005.
I used one coat for each and they all applied really nicely and dried quickly. P005 was the only one that looked a bit streaky in real life. I am a bit disappointed with my photos as they all look a little streaky but in real life they all looked lovely.

P001 Moonshine is a blue shimmer and I applied one coat over black for a really pretty effect.
P002 Lotus in Moonlight is a pinky red shimmer, again one coat over back gave a really lovely effect. P003 Only You is a pinky purple shimmer, really beautiful over black.
P004 Jade Sky is a gorgeous green shimmer, stunning over black.
P005 Moonsky Glow is a golden bronzy shimmer, lovely over black although it did appear more streaky than the others, particularly in the photos - less so in real life. I am not usually a fan of shimmery polishes but I like these and I am certain they would look good over many dark bases.

Posted by debbie jarman at 07:26 No comments: