May Challenges - a smoosh and some stamping

Technically this wasn't a challenge, I just stamped over my smoosh to test a new plate.
The smoosh was made up of Leighton Denny Brick Road, Leighton Denny Graycious and Above the Curve Don't Blink.
I stamped over it using Ejiubas EJB-02 and China Glaze Liquid Leather. I haven't heard of this brand before but all of a sudden they seem to be all over my IG feed and my first thoughts are that I really like them - the plates are well etched and easy to use.
I couldn't help thinking this needed some purple so I lead-lighted the silvery areas with Barry M Purple Pop, which really gave this the look of pansies. 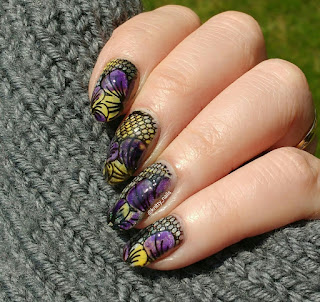 Posted by debbie jarman at 07:54 No comments:

Vintage for #ggfnachallenge - I knew what I wanted - not sure I quite got there but this is today's mani - using a whole host of polishes and plates :
Barry M Surfboard and Laguna
Pet'la Basics and Colour Alike Kind of White
Clear Jelly Stamper CJS-02 with A England Rose Bower and Saint George,
Kandy Colors Glovelovers and Barry M Pink Candy
and finally Ejiubas EJB-02 and Barry M Cotton
I liked the 2nd step and the final step - thank you to my Emily for suggesting the final layer - we knew something was missing!

Posted by debbie jarman at 10:41 No comments:

This week's colour prompt for #40greatnailartideas was hot pink, and my pattern prompt was water spotting or water marbling.
We had a bit of a debate on whether hot pink was a warm pink or cool. I then had some debates with myself whether I could get away with stamping since actual water marbling and water spotting always results in a disappointing mess for me. Then I debated if I should use black - something in my mind said water spotting should be black but then I googled hot pink water spotting and one of the first images that came up was Claire Kerr from Kerruticles with a hot pink over pale pink mani. So, I went for 2 really bright pinks, HJ Manicure Candy Pink as my base and stamped with Esmaltes da Kelly Chuoisco and Hehe 081.
It was bright! very bright!
I couldn't resist a second layer of stamping so I used China Glaze Liquid Leather with the same image and I have to say I found that a lot more wearable! I do like that I can see the 2 pinks underneath. 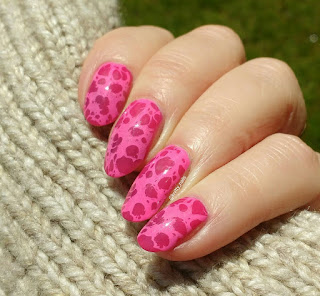 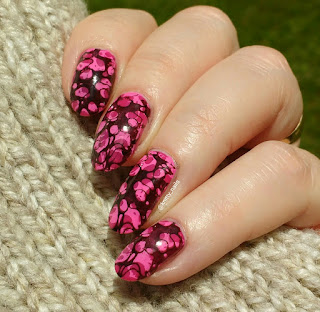 An InLinkz Link-up
Posted by debbie jarman at 12:51 No comments:

May Challenges - My Favourite Animal

It's a good job I have plenty of cat plates - its always going to be cats for my favourite animal!! and this one was for #firedazedchallenge.
This time though I am sort of recreating a mani done by two lovely friends of mine. Iva and Stefi did a mani for me to match the scarves I sent them and they both used a Moyou London Enchanted plate, Iva used Enchanted 14 and Stefi used 13, which has the smaller images.
I went for 13, basically because I didn't realise there were 2 plates but actually I think that although I generally go for the bigger images I am pleased with the size of these.
Firstly though, a stunning polish from 'Ard As Nails - Golden Sunset is from the Safari Collection and it is absolutely beautiful! This golden orange polish is just perfect! Even though I don't really like orange, I love this!
I did a gradient with Golden Sunset and Park Ranger, a lovely khaki shade from the same collection and then stamped the cat image using Colour Alike Iced Coffee having decided I did not want to use white. I was really pleased with the finished mani and again, I did shiny and matte and loved both! 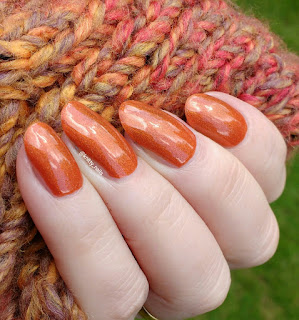 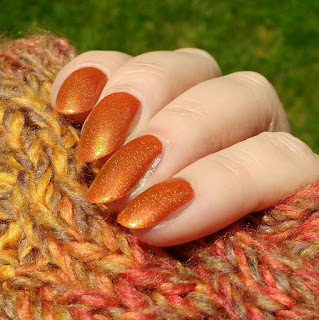 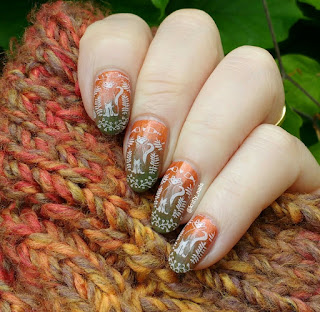 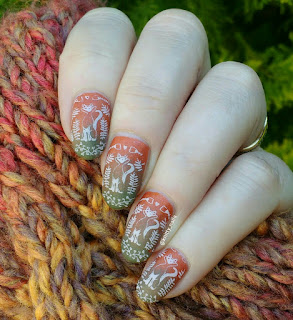 Posted by debbie jarman at 23:54 No comments:

Still trying to decide whether to keep my blog going but in the meantime blogs posts will be a mix of short and long...
Spring Flowers for #clairestelle8may - I used Fab Ur Nails FUN14 and Barry M Black Pistachio over Barry M Cream Soda and then coloured the tulips with Barry M Purple Pop - Tulips are my most favourite spring flower and I love black tulips!
I was thinking of using more than one colour but since black tulips are my fave I decided just to stay with the purple. I love this new Barry M Lolly Gloss. I am glad I bought all 4 but I expect the purple will be used most! The depth of colour is great - nothing worse than a tint that is so pale it may as well not be there!
I was pleased with how these turned out and glad that I used green to stamp over the soft cream soda shade, rather than pure black and white.
Finally I added a matte top coat - unsure which I love most! 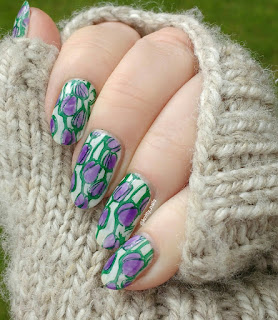 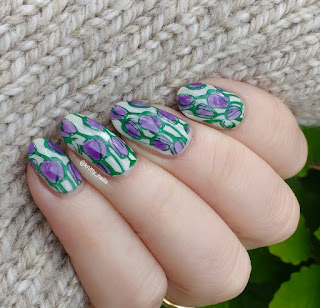 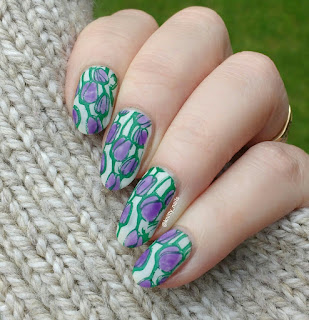 Posted by debbie jarman at 06:43 No comments:

May Challenges - Pastels and Butterflies and some blue

This is one of those many stage manis but I'll try and keep it brief.
The current #whencolourscollide challenge was tone on tone - blue so I initially chose 2 blue polishes which I felt were of a similar tone.
I started with Colors By Llarowe Be Bold in Blue - Limited Edition for Multiple Sclerosis Trust - this is a truly gorgeous blue which was being sold by Rainbow Connection with the proceeds going to the MS Trust. This is a holo polish but the sun was not shining and my flash photo was pretty rubbish so I am just posting the "daylight" photo which shows this to be a stunning shade of blue even without any holo!!
Then I used DRK Magic Garden with Colour Alike Blue Ocean - I was planning on keeping this mani simple but I didn't feel it had enough going on so I went for a second layer.
I used DRK Magic Garden with Colour Alike Blue Sky (similar  tone to Blue Ocean but paler) and the Jumbo Clear Stamper with the intention of aligning the scales of the image between the first layer, I think I succeeded mostly but not fully!
Then Pastels for #clairestelle8may - I decided as I had added a pastel layer to the blue mani I could keep going and add some pretty flowers with DRK Magic Garden with Colour Alike Sweetheart and Mint.
And finally, Butterflies for #firedazedchallenge - Pastel flowers seemed like a good backdrop for butterflies so why not! I used DRK XL Designer 1 and Colour Alike Kind of White.
This mani evolved over a couple of days and I enjoyed each layer - it was nice finally to have some time to play with all the lovely colours!

Posted by debbie jarman at 03:52 No comments:

May Challenges - Aztec over a smoosh

For this week's smoosh I used China Glaze Long Kiss, Barry M Flamingo and Avon Iceberg White.
The red went a bit pink but I don't mind - I loved the way this one looked and even before I did it I was pretty sure these colours would make a great base for the Aztec mani for #ggfnachallenge.
I used Apipila 09 and Essence Stampy 002. The images were a bit small so I stamped them diagonally to cover most of my nail.
I liked this so much I wore it for a day before I did the second layer. Determined to conquer the clear jelly stamper I bravely attempted shadow stamping with the same images again and Avon Iceberg White. Having stamped diagonally I think I added to the complications of lining the second layer up and the images didn't pick up 100% perfectly but I think it gave a nice effect.
They reminded me of something and then I spotted my Albufeira dolphin on the shelf! of course!! so a quick shot of #mynailsandmydolphin too! 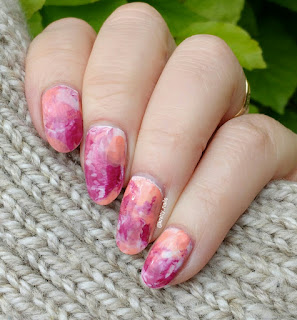 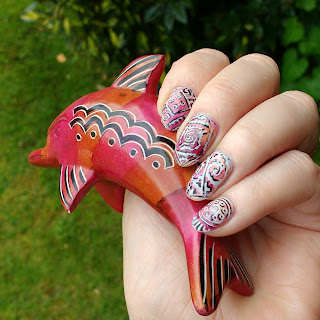 Posted by debbie jarman at 12:01 No comments: 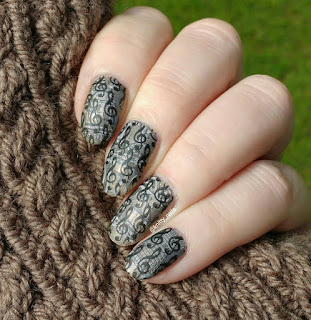 An InLinkz Link-up
Posted by debbie jarman at 01:31 1 comment:

Paisley for #firedazedchallenge -  I fancied something really colourful so I went for Colour Alike Juicy Tangerine and Fresh Mojito with Messy Mansion MM48. Just one quick layer of stamping today but if you spot any sparkles that's because there is a pink galaxy hiding under there!
These "A Perfect Summer" polishes from Colour Alike stamp beautifully and I love the colours! 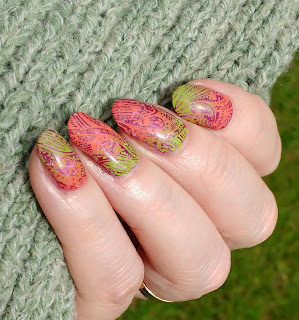 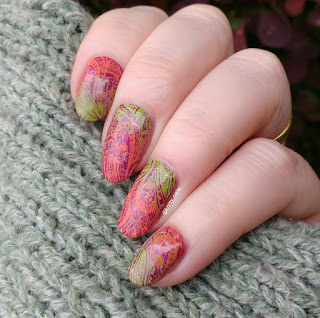 Posted by debbie jarman at 10:29 No comments: 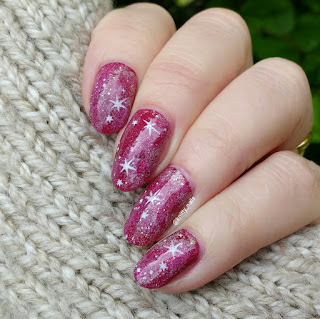 Posted by debbie jarman at 09:55 No comments:

Antique for #clairestelle8may
I decided that A England Virgin Queen would make a great base for this mani and I chose items on Moyra Stamping Plate 05 Vintage that look looked like you might find them in an antique shop.
I stamped with Colour Alike Iced Coffee and then Saffron London Black for the shadow stamping - not perfect but close enough I hope!
I need some practice using the clear jelly stamper, the aim being to slightly offset the second layer but in the same direction for all nails! 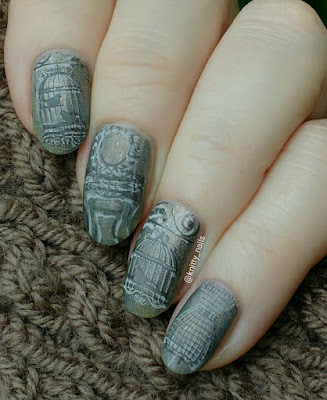 Posted by debbie jarman at 10:09 No comments:

May Challenges - Negative Space and Halloween in May

I tried to do a negative space mani for a facebook group but it was a bit of a fail - even with 2 coats of tinted polish ( Leighton Denny Twilight) the staining showed through :( so in the end I added a coat Kandy Colors Grape Much? over DRK Magic Garden and A England Camelot.
I took a few photos and played around with filters but basically it was still a big no! matte or shiny - Nope!
Anyway, the Kandy Colours jelly did save it I think and it made a nice base for the next mani.
Halloween in May for #clairestelle8may - well certainly a better chance of getting a sunshine picture in May when you've used holo polish for your Halloweeny cobwebs! I used Nailways Darker Period - Halloween and SV by Sparkly Vernis Blurple Ice Cubes over the previous mani. 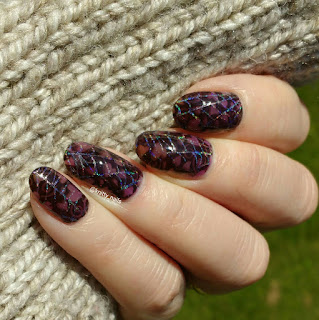 Posted by debbie jarman at 11:29 No comments: