I don't blog Emily's nails very often but she has kept them really nice this summer, and she loves this mani - her most favourite nails ever apparently.
She has Nails Inc Atomic on, probably for the 7th or 8th time. I was asked last week what was my most used varnish, I answered probably LD Little Thief or NI Porchester Square, but actually my most used by someone in the house other than me, 100% certain its Atomic!
She caught sight of Nail Lacquer UK Sticks and Stones Blue sat on the shelf waiting to be used and insisted that was what she wanted and it looks absolutely wonderful over Atomic. It's a great contrast and really shows this gorgeous glitter off. It has black and white sticks, black and white hexes, black squares, blue squares, small black, white and blue hexes, lovely little lilac/silver hexes and some lilac squares too, I think that’s everything!!
I will almost certainly be blogging this again, on my own nails and equally certain it won't be against orange! but I will be thinking of a good contrast for it, because I would want to lose any of it's lovely colours and shapes. 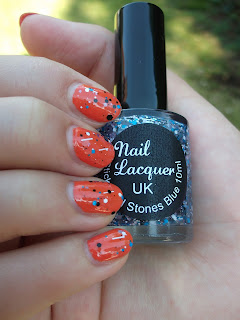 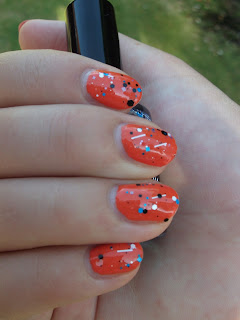 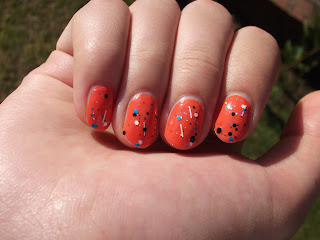 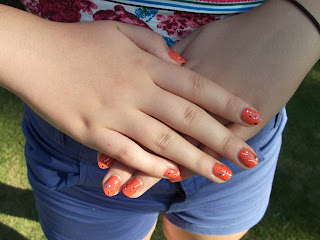