Not many of these to go now - where did a year go? and my poor blog has pretty much fizzled to nothing!
This latest challenge is almost a week late because last week was one of those weeks when so much went wrong to absorb all my free time that usually gets frittered away on nail stuff, and then when I thought of what I might do it involved striping tape which means an overnight drying of the base coat and time consuming placing of tape so that idea fell by the wayside (to be recycled when I have more time!)
The book I am reading is the Bourne Trilogy - good book but it failed to inspire me for the nail prompt. However Mr Knitty Nails is reading Game of Thrones - ah ha!! that's a bit more inspiring. I know my friend Iva had done some great dragon's egg nails so I thought I'd do that.
I used Pet'la Kaboom and For Your Nails Only Bullion over A England Proserpine. The stamping wasn't as crisp as I would have liked and I have no idea what I did wrong but some days you just just have to go with it and move on, so here are my dragon's egg nails. 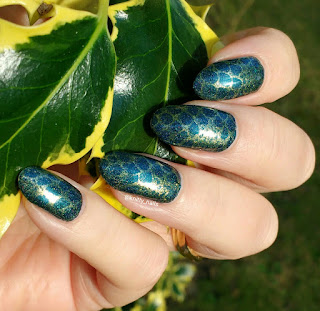 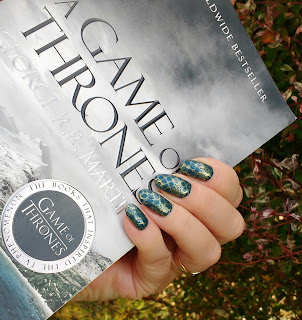 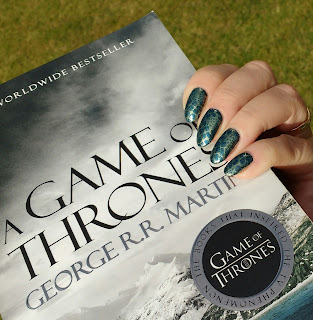 Email ThisBlogThis!Share to TwitterShare to FacebookShare to Pinterest
Labels: A England Proserpine, For Your Nails Only Bullion, Pet'la Kaboom