For New Year I decided to go all out and paint my nails red. It's not a colour I have ever worn until I fell in love with China Glaze Ruby pumps just before Christmas.
I thought I would the freebie that came in the November Glamour mag, Nails Inc St James.

This is a lovely red, a tiny bit on the pink side I think with a very subtle shimmer but basically its a creme. It did apply nicely but after 2 coats I could still see a visible nail line and if I had been wearing it on its own I would have used a third coat. 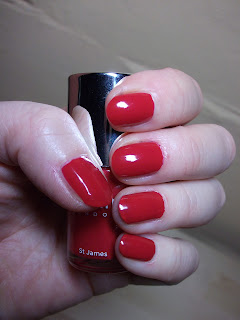 St James on its own is lovely but maybe not quite me, but I had a plan. Having scoured the local area and failed to find the Barry M Ruby Glitter I was delighted to pick one up in Superdrug, Cheltenham. Although it's called Ruby glitter, there seemed to be more black than Ruby in it but I think the effect on red is perfect. In the natural light I can see more of the pink ruby red glitter but mostly it looks like a mix of small and very fine black glitter and dare I say it on a red background, it's a reasonable substitute for Nubar black polka dots! It applied nicely although I did have one finger too densely glittered and another that needed a second coat. Re-did the over glittered one and on the whole I am really happy with the effect. I haven't tried this glitter over another colour yet, I think maybe more ruby would be apparent. 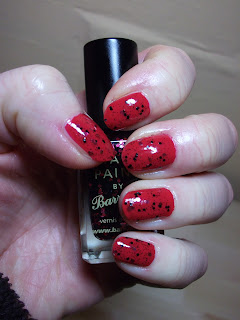 I am still wearing this so no idea how easy it will be to remove but after 24 hours it still looks good.