Oooh I have had a real challenge with this one! and it feels entirely unfair because it is a beautiful polish and it deserved better but the nail varnish demons have been conspiring to make this a really troublesome manicure.
Iconic Effect Ocean Sparkle is a lovely green base that has a subtle shimmer and a mix of hexes and tiny glitters in various shades of teal and blue.
So, I had a unnamed Colorclub in a tealy green, that I thought would make a good base for this - no, it was streaky, watery and it is now in the bin! Then I used Nails Inc Haymarket and of course that went on beautifully, but this was not the right base, it's too blue and I realise that now. I should have used a more green base, maybe my Avon Peppermint. I think in my mind Ocean Sparkle was more blue, so when I painted it on it seemed wrong, then the top coat was all gloopy, added some Seche Restore, still gloopy so that's gone in the bin too. Finally I took some pics, and of course being green blue, the camera has failed dismally to pic up anything like what's on my nails!
Anyway, enough of my woeful whingeing about what went wrong, here are pics of a very pretty polish. Its greener than I thought it would be, not sure why as it's very clearly green when I look at the bottle, but even the camera thinks it's more bluey! Only one picture accurately captures what I can see.
Some of these pics are one coat of Ocean Sparkle, some are two coats - not sure there is a massive difference, obviously a few more glitters, but pretty either way. It painted on nicely, and dried well. 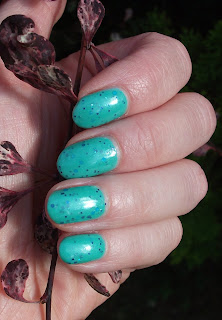 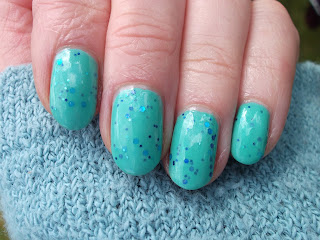 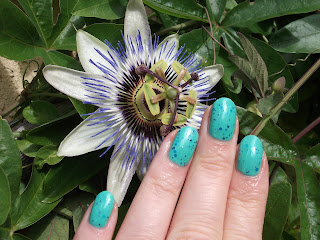