I have just finished a small knitting project which I had planned to do in the spring but got waylaid by other things. Anyway these are perfect for Autumn, going into winter.
It seemed to me last winter there was a bit of a revival of the old leg warmer, and then a variation on the theme came the boot topper so having knitted umpteen pairs of gloves, I thought I'd give these a try.
There are a lot of lovely patterns out there but the pattern I chose is a pretty simple one. As usual I found it on Ravelry. The pattern I chose was Wavy Cable Boot Toppers by Robin Nickerson, but I did do a bit of adapting.
The pattern called for waves, but I went for the twisted rope like form of cable so I did back cables each time rather then alternating back and forwards. I used Stylecraft Life Chunky in Olive (100g ball) and 5mm needles. 100g wasn't enough, but that was all I had so I did the hidden part in some old Aran wool I had stashed away, 200g would have been plenty.
They were quick and easy to do and I think there are two ways to wear them, folded down as they were designed to be worn or more like a leg warmer. This works with my short boots as it gives the illusion of a longer boot, great if you are wearing a short skirt.
The pictures aren't great, not that easy to photograph your own feet! 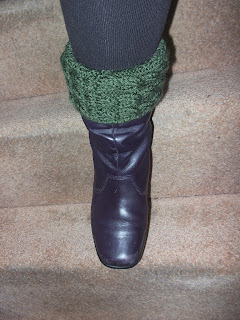