Tracey from Bite No More invited me to join a Christmas Nails Challenge, and although nail art is not my thing, I thought I'd give it a go - see - such bravery :)
The first challenge was snowflakes. I wasn't sure my freehand skills were up to painting snowflakes so I decided stamping was the way to go, but oh yes, I've never stamped before - uh oh!!!
I bought a stamping kit a while back, tried it once, with a tiny amount of success, but decided I should try again and although this was not entirely successful I am sharing anyway, because it wasn't a complete disaster and I feel I ought to share good and bad!!
My stamping plate didn't actually have any snowflakes but I found an 8 point star that I thought would do the trick.
I had been wearing A England Rose Bower and it's such a Christmassy red I decided to use that as my base. I have stamped with Barry M White, which worked reasonably well, and then added a few smaller flakes with a dotting tool. I think if you don't look too closely, the mani has the essence of snowflakes and to be honest looks a bit better than I thought I would be able to do, so I am not too ashamed to show this.
I do need to learn how not to smudge my stamps, and what to do about the plate clogging up with polish so the last stamps lack definition, but on the whole, not too bad! 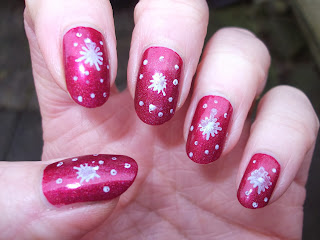 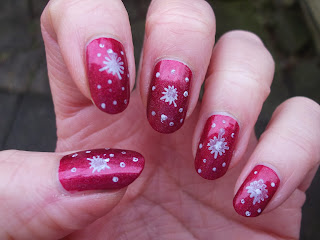