I am having such a lot of fun trying to master the "blank" image on the Lina Stamping plate, Lina Make Your Mark 03 that I think background gradients will feature on a lot of my manis.
It is so much less messy than using a sponge for a gradient and as I only ever using a gradient as a background for stamping the results I am getting are encouraging and acceptable.
This time I used two blues- A England Tristam and A England Dancing with Nureyev.
Then I added flowers from Lina Make Your Mark 03 with Esmaltes da Kelly Wendy, and then a second layer of flowers with Lina 4 Seasons - Spring 01 and A England Natasha's Dance.
This was one of those manis that parts of the stamping were invisible to the camera at certain angles but overall I think the effect was quite pretty and of course being blue I really did like it!
I included a shot part way through to show the steps although I was a bit pushed for time so I did not do a a full step by step collage. 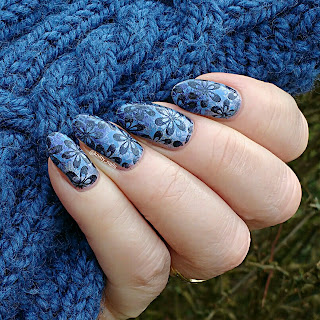 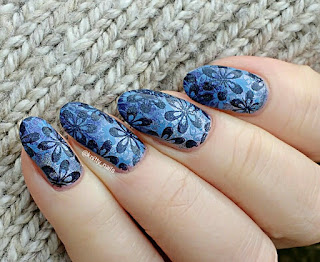 An InLinkz Link-up
Posted by debbie jarman at 02:36