OK so it's June and this is the first June challenge for #30daysofcolourchallenge. The prompt is Silver / Negative Space. I love the sound of all the other prompts for the June challenge but I don't like silver really and not a huge fan of negative space manis. We can choose to do either or both of these prompts but as I am not much fussed by either I thought I'd do them both and give it my best shot!
I really really can't do bare naked nails so I started with base of Nails Inc Fulham Palace Road (a nice warm pale nude).
Then I used Avon Metallic Effects Platinum Petal to stamp the central image from Messy Mansion MM49. This is perfect for a negative space mani and even has a strip at the top so that you can do a french mani. I tried to line that up properly and had a moderate level of success.
I can't say I love the mani but it came out about as well as I could have hoped for and I like it more than I expected. By the end of the day it had grown on me but I can't say silver metallic nails will be anywhere on my top manis list!
On the plus side, I now know that Avon Platinum Petal stamps well, and I really like that image on MM49, but next time I will certainly be using a different colour combo.
I had a bit of time on my hands so I had a play around with a new app on my phone, so whilst it's not the best mani to use, I have also included a macro shot. 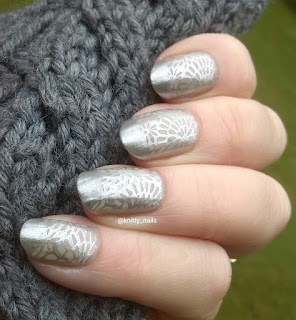 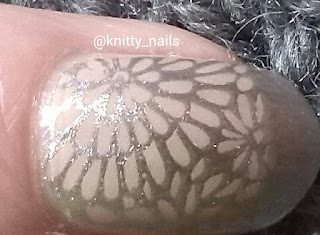 An InLinkz Link-up
Posted by debbie jarman at 00:55