This week's Wiki'd Nails Challenge was a tricky one. From Wikipedia : "Nikola Tesla 10 July 1856 – 7 January 1943 was a Serbian American inventor, electrical engineer, mechanical engineer, physicist, and futurist best known for his contributions to the design of the modern alternating current (AC) electricity supply system".
In the end I decided to stamp the nearest pattern I could find that looked like alternating current. I was surprised how few plates I had with wavy patterns on but I found a couple which I have used over my red mani from yesterday.
I used Sugarbubbles SB 028 with Essence Stampy 001 and then Emily de Molly EDM12 with A England Camelot.
After the first stage they were quite bright and I think the 2nd layer of stamping calmed them down a bit - not sure Mr Tesla would have approved but I think they look quite cool. 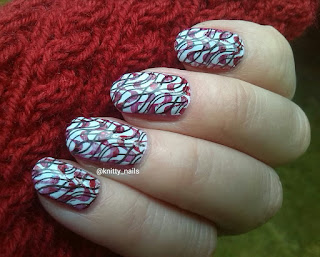 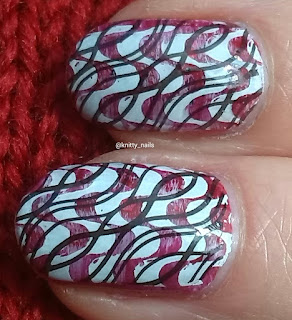 An InLinkz Link-up
Posted by debbie jarman at 12:22