I've combined two challenges for #30daysofcolourchallenge.
The first one was Denim and as I had just received the most gorgeous denimmy holo polish in the September Paint the Rainbow Box, I though it would be perfect. Grace-full Second Star is a beautiful mid blue holo, and a real denim blue shade. Although I have lots of blues I don't have many blue holos which is probably why the September box tempted me so much!
I have not used a Grace-full polish before but first impressions are good - it was easy to apply, dried well, and good coverage in two coats. This blue is perfect, very wearable and I love it!
Although rain had been forecast all day, there was a window of sunshine which for once coincided with me finishing my nails, so I actually got a reasonable photo.
Apologies to long nail fans! they were making me nervous so they've had a trim, but they grow so quickly, I am sure they will be long again soon.
The second challenge was Leaves. As I had just done an Autumn leaves mani with fairly solid stamping I looked for more of an outline this time.
I started with a skeleton leaf image from Apipila Super Plate B and Virtuous Polish Glory, a vibrant golden yellow and then added another layer of leaves from Lealac LLC-A with Virtuous Polish Diligence, a very bright neon orange.
The golden yellow against the blue does look more of a brown shade, but it's a perfect leafy brown so I am happy with that and because the stamping is much more open, the blue holo is still very apparent. I think these are a lot more subtle than the last Autumnal mani and I decided to leave well alone and stop at two layers of stamping. 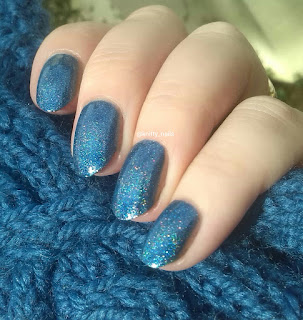 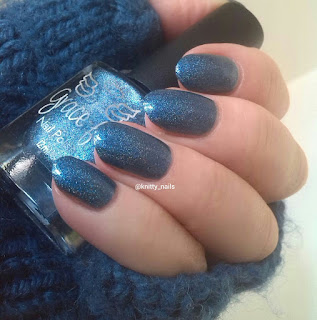 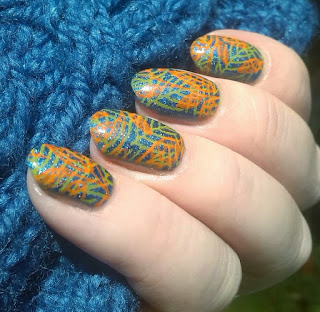 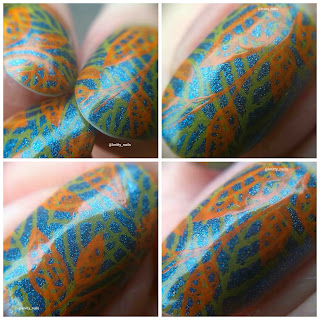 
An InLinkz Link-up
Posted by debbie jarman at 02:55