This week's Wiki'd Nails Challenge was Deinocheirus - a large dinosaur. Lucky for me I have Messy Mansion MM47 which I really bought for the ammonites and ferns, although the little dinosaurs are cute. I have to say I thought the likelihood of me using the large dino stamp in the near future was slim. Especially as the image I needed was one that would have to span more than one nail. I am not good with placement of single images, and spanning 3 nails seemed rather daunting, but you've got to try these things.
I decided a short while back that Deinocheirus was going to be stamped over the red pond mani. I added a final coat of the red Nelly Polish to 3 nails and then stamped the dino in 3 parts across them, leaving the little finger - too small for anything useful really!
I then spent a silly amount of time working out how I could actually hold my hand so that the 3 images vaguely lined up, maybe a bit of imagination is required.
To be honest this worked a lot better than I thought it would and I think Deinocheirus looks quite cool in his red fiery background - maybe he lived in the shadow of a volcano. 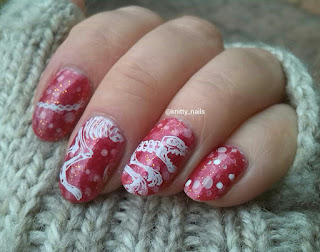 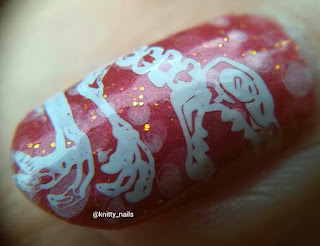 An InLinkz Link-up
Posted by debbie jarman at 00:39