May Challenges - Green and Black Stripey nails and some flowers

Last weekend was a very important day for my son's football team - they made it to the final of the local league cup - sadly they lost on penalties but it was a great match and I am a proud mummy!
Anyway, having promised my son no shouting from the sidelines or cheer-leading, I was allowed to do my nails in team colours.
They play in green and black stripes so I started with Nails Inc Emerald Street and then added the stripes with Essence Stampy 002 and Lealac LLC-A which is probably my most used stripe image - I like it as the stripes are wider than any other plate I have.

Then after the weekend I tried out one of my new Hehe plates over the green and black stripes - I am still a bit undecided how I am going to use these plates as they combine florals with other patterns so generally not conducive to double stamping but I am quite pleased with how this turned out.
I used Hehe 074 with  Moyou London White Knight, and then coloured the white with Kandy Colors Hey Girl and Glovelovers (my custom dark green). 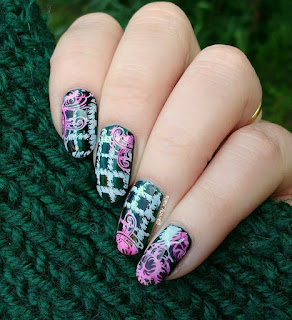 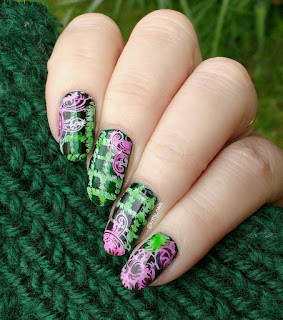