Galaxy nails - Picture Polish Bohemian, A England Rose Bower and Her Rose Adagio and a little bit of stamping

Today I have at long last tried galaxy nails! The simple truth is that although I have seen and loved lots of galaxy nails, I doubted my ability to paint any stars and had the nastiest feeling that I could do a really nice background and then make a real mess at the final step.
UberChic Beauty to the rescue! As I was carefully inspecting the images on my UberChic plates, I spotted an image on UC 2-03 which looked perfect! lots of little stars randomly scattered in the sky.
Picture Polish Bohemian is my main polish for this mani - I first saw some swatches a couple of weeks ago and I had 2 conflicting thoughts - pinky/red/bronze - absolutely not my colours - but for some reason I wanted it anyway! I think it was the idea of a multi-chrome type polish in a range of colours unlike any I had seen before.
I finally gave in to that inner voice that told me I needed this polish and when it arrived I swatched it thinking I'd hate it but I didn't. I also swatched it over black, as I would with any duo or multi-chrome, and decided maybe that's where I'd start as I was really in the mood for dark vampy nails.
I painted my nails with a base of China Glaze Liquid Leather, and then in order to avoid any streakines I sponged a light coat of Bohemian over the top. It looked so pretty that I just top-coated it and wore it like that for a day but as I looked at it it struck me that would make a lovely base for galaxy nails, and there was that UberChic plate just waiting to be stamped!
So, today, I used a small sponge and added some A England Rose Bower and Her Rose Adagio. Then I stamped the stars with my Essence Stampy 001.
If you look closely at the plate you'd see there are more stars than on my nails but I made a point of scraping quite thoroughly and as a result I didn't pick up as many of the tinier stars. I thought with all the colours and the holo, it may be a bit much. I also took a clean up brush and carefully brushed a few more out before topcoating.
I am completely in love with the finished look and I will certainly be trying these again! 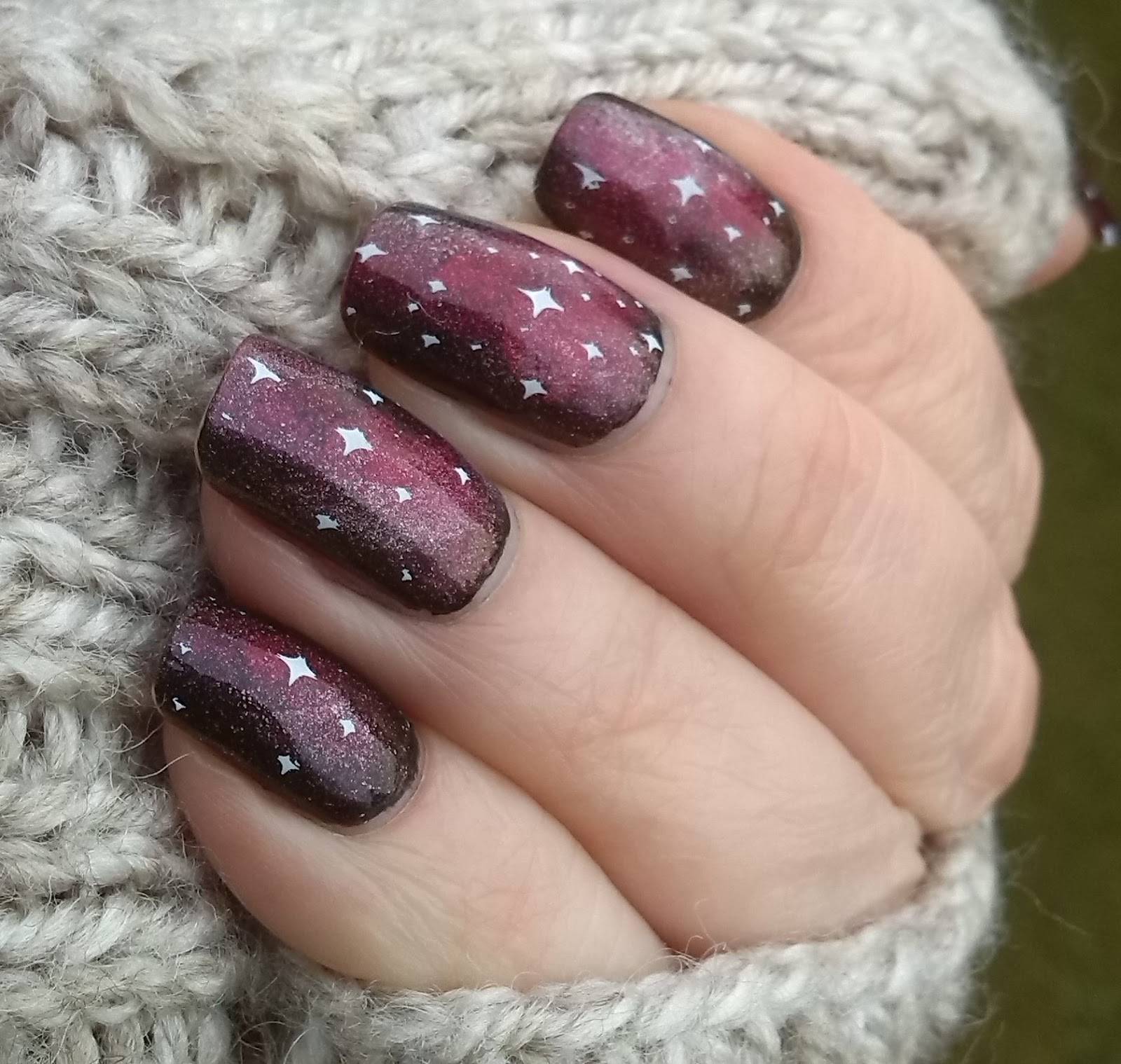 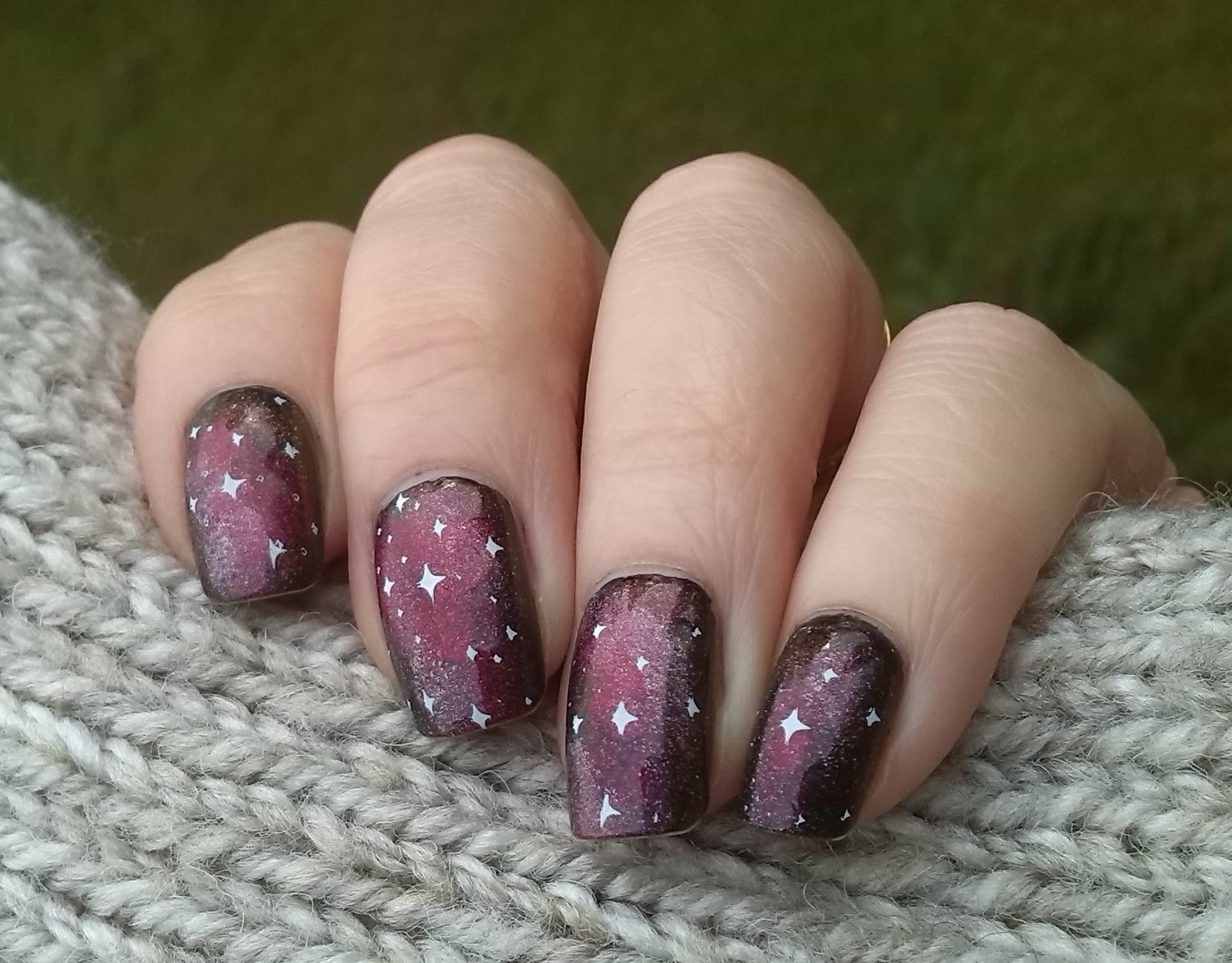 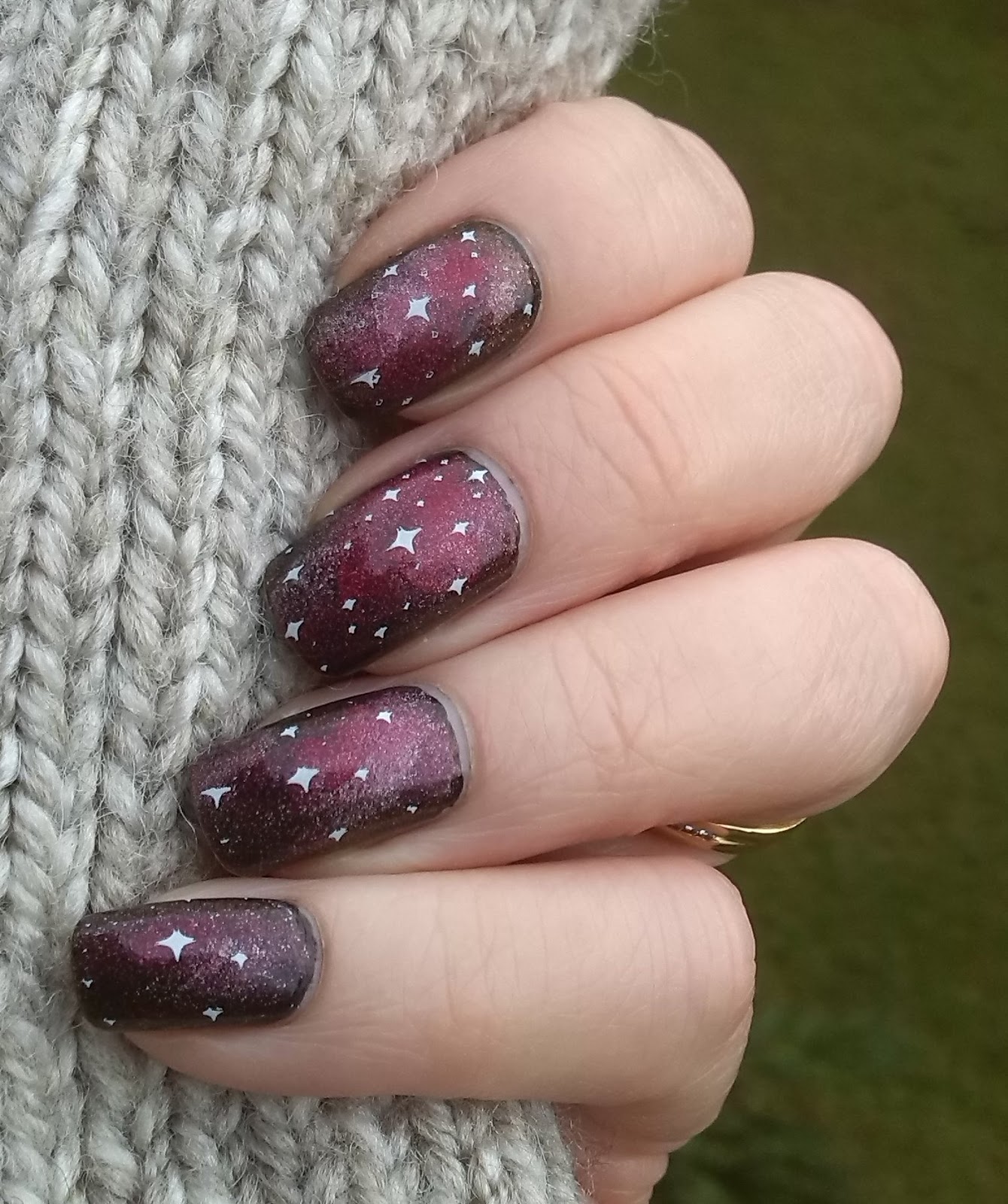 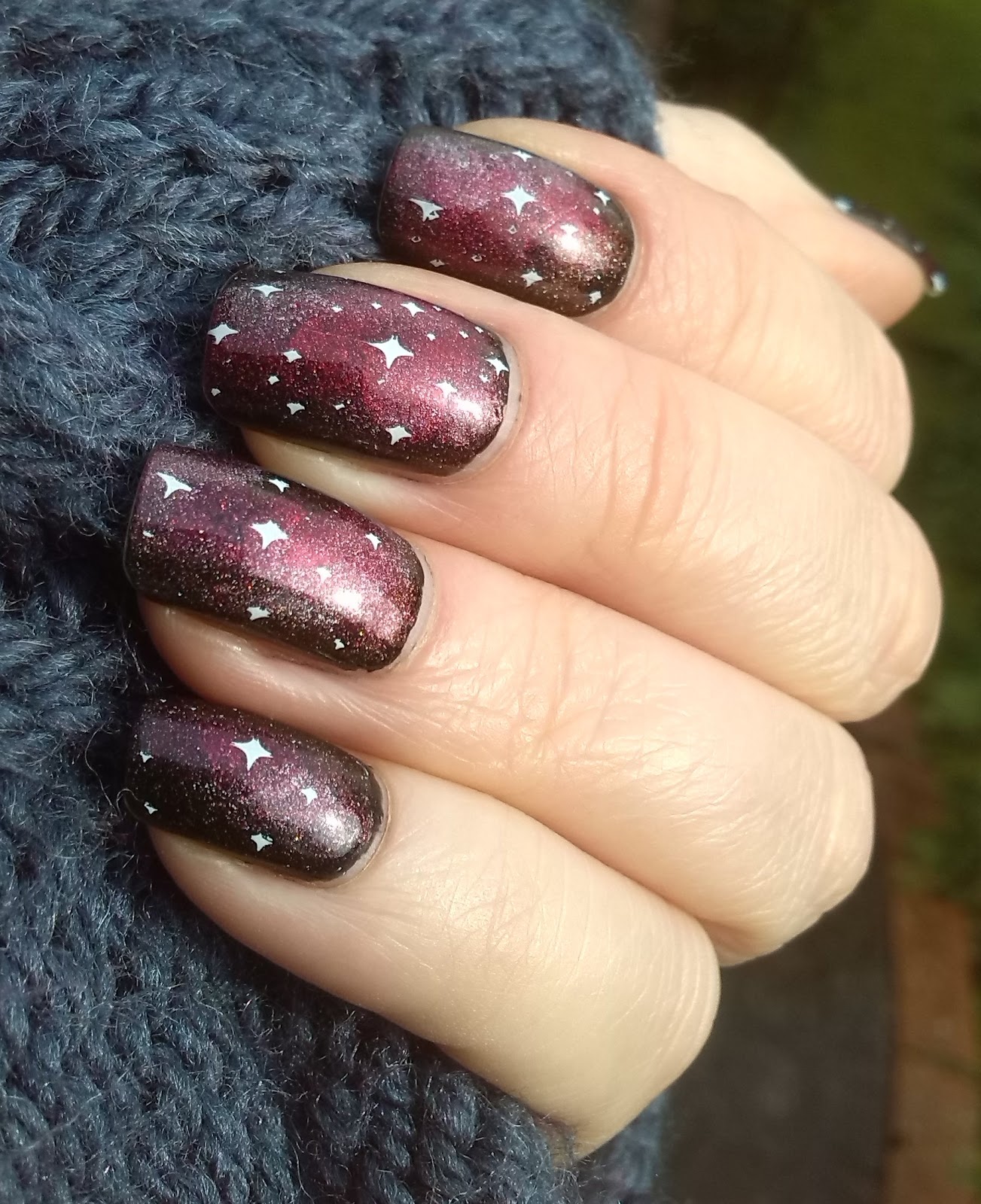 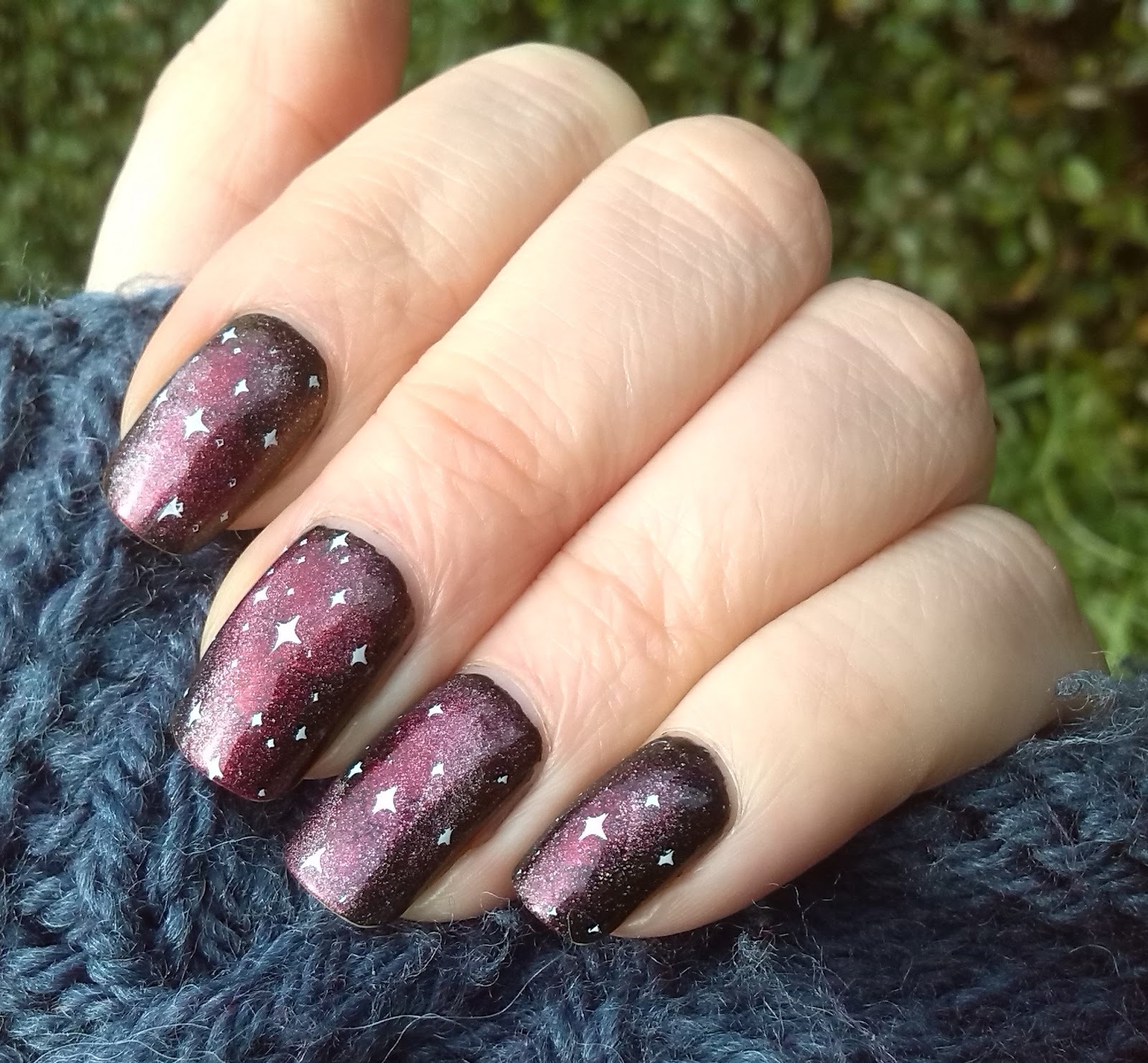