Well it is Thursday again, another letter down in the A2Z challenge and we are nearly at the end. Today's letter is X for eXtra special. I had a mani planned but it ended up being quite similar to the one I did yesterday in concept and once I had twigged it was St George's Day I decided I'd be all patriotic and do something for that instead.When I was younger, I was a Brownie and then a Girl Guide and the dates of the 4 patron saints for England, Scotland, Ireland and Wales were drummed into us.
I am English so St Georges's Day is kind of special, it's part of our heritage and who knows what our world would have been like if St George hadn't slayed the dragon ! Also, dragons are magical, mythical creatures and therefore eXtra special!
Now I know it's been done before but it seemed obvious to me which two polishes I would use, A England Saint George and A England Dragon.
So I started with Saint George which I think is my favourite ever A England, so that makes it special anyway. The dark teal shade is so gorgeous I almost don't care that there is no sun to see the holo.
Then I used Dragon to stamp parts of the dragon image from DRK XL Designer 2. The dragon was too large to stamp in full but I have used his tail on the index and little finger and his head and tail on the other two fingers and thumb.
I love these two greens together although the stamping is quite subtle, and photos have been a challenge. I am really pleased with these, the dragon looks so cute! but I do wish I'd been able to get better pictures. 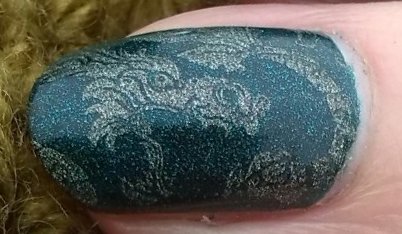 An InLinkz Link-up
Posted by debbie jarman at 07:58