It's Thursday, so it's time for the next letter in the A2Z series, this week is P for Pale.
I am not really a pale polish wearer, except for nudes but I recently had the opportunity to buy a polish which is pale and yellow - not at all in my comfort zone but sometimes you just have to try!
Above the Curve Hufflepuff is a pale creamy yellow with tiny black glitters and a few larger black hexes. This is from the Harry Potter collection, Hufflepuff being one of the houses, apparently.
The polish is a crelly so I opted for undies rather than a huge number of coats. I used the amusingly named Attitude Masking Tape as my base - this is a warm cream, a buttermilk sort of shade which I have had in my stash for ages - it really only gets used as base but it's a nice quality and dries well.
I then added 2 coats of Hufflepuff. The larger hexes were a bit shy, but I don't particularly mind - not a huge fan of big glitters, and if they'd all stayed in the bottle I'd have been quite happy. However, despite my hatred of yellow I really like this polish, I think the fine black glitters that pepper the polish make all the difference, and the yellow is a really nice soft creamy colour. I wouldn't rank it as an all time fave in the ATC range but I like it a lot more than I expected to.
I completed the mani by stamping a sort of swirly tessellating triangle pattern from Pueen Buffet Leisure 79 in pale black - yes pale black! It might look grey, but it's just a rather wishy washy black. Perfect for the look I wanted! Saffron London polishes were recommended for stamping but the formula changed so they aren't really opaque enough. However, sometimes you want something a bit more subtle so I still think there is a place for them in my stamping box.
Overall I am really pleased with my Pale mani, not my best A2Z but certainly an improvement on last week's. I like the subtle look of the stamping combined with the glitters obscured by the crelly, and I like the grey and creamy yellow combination. 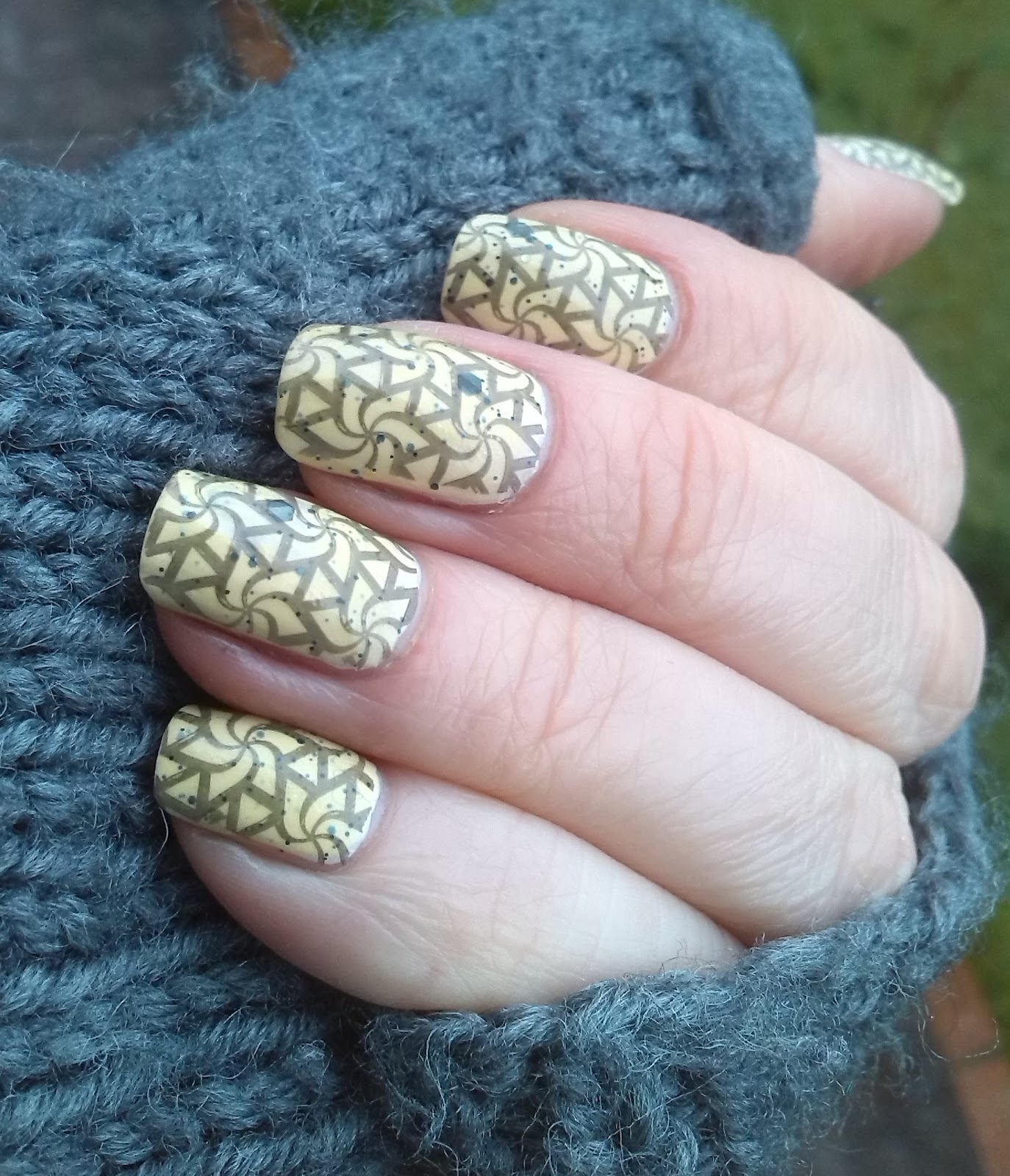 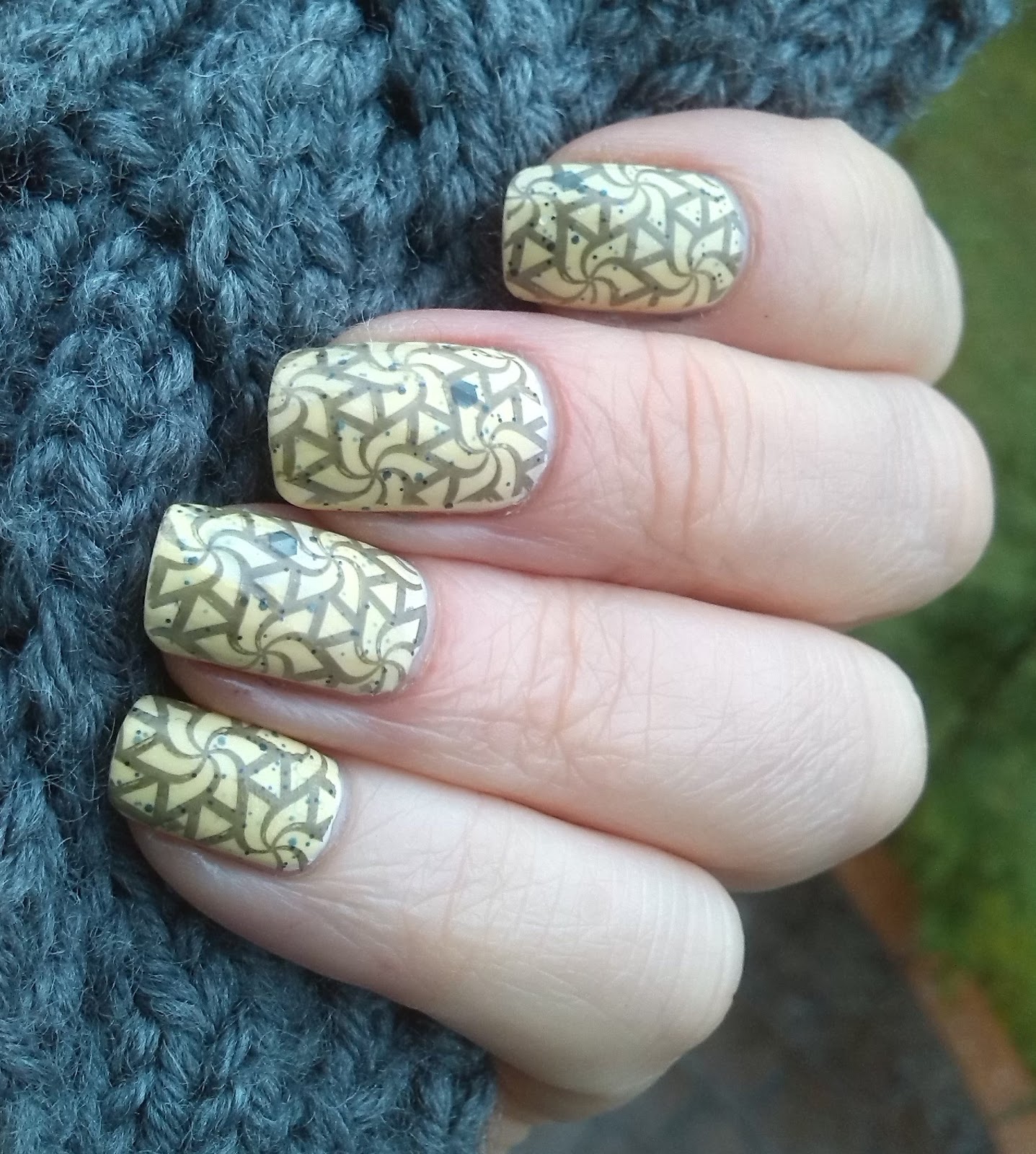 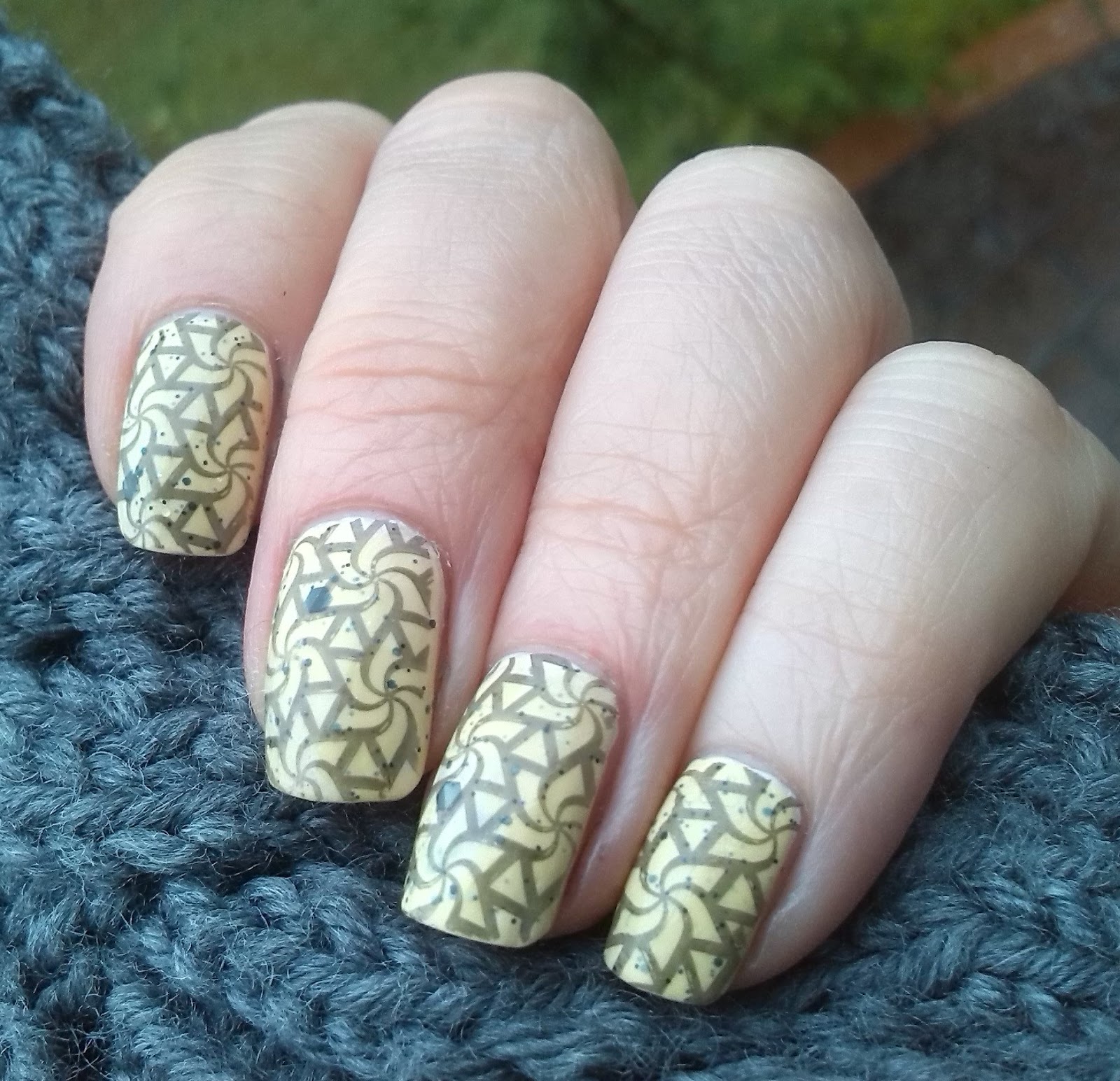 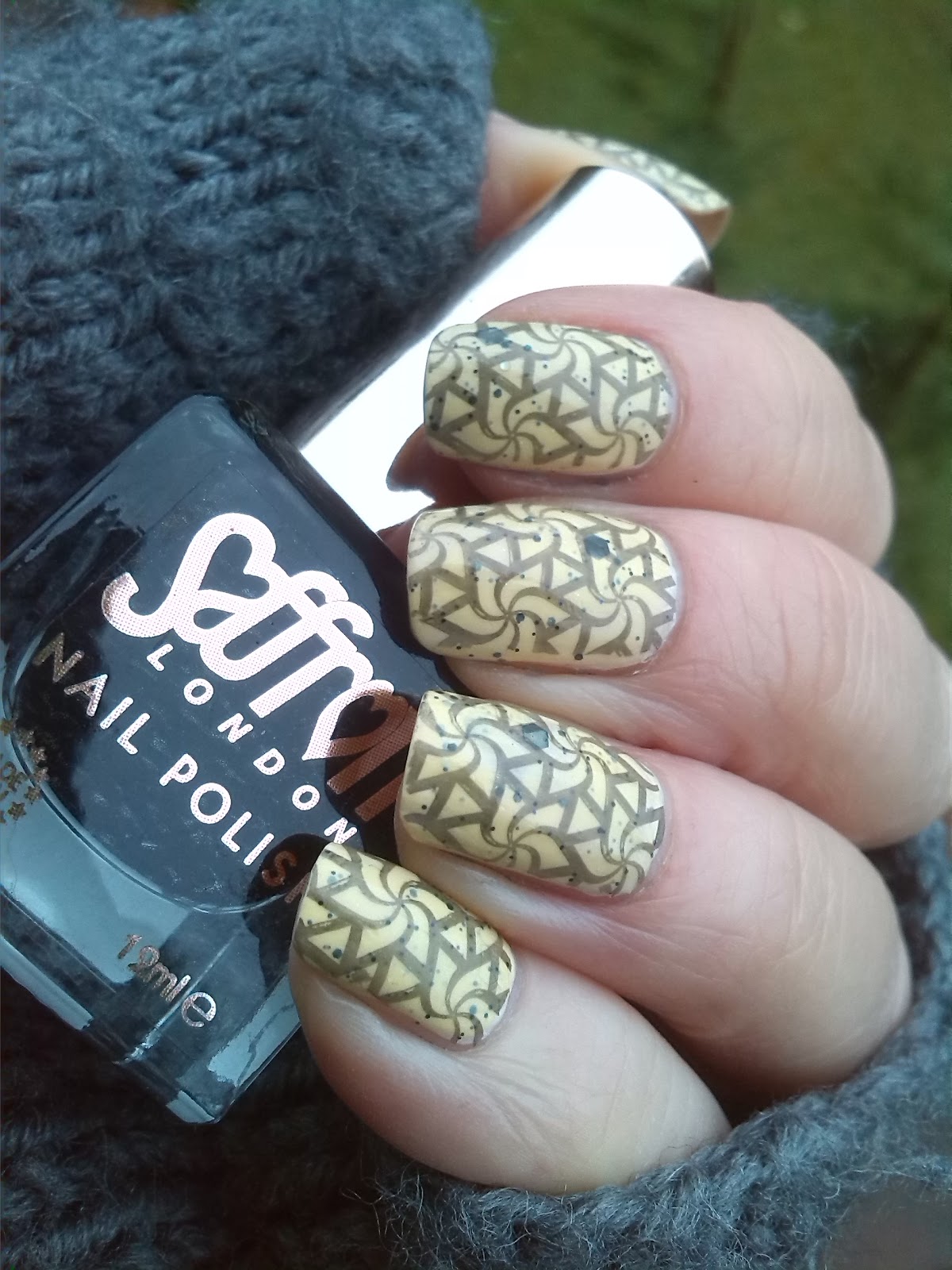 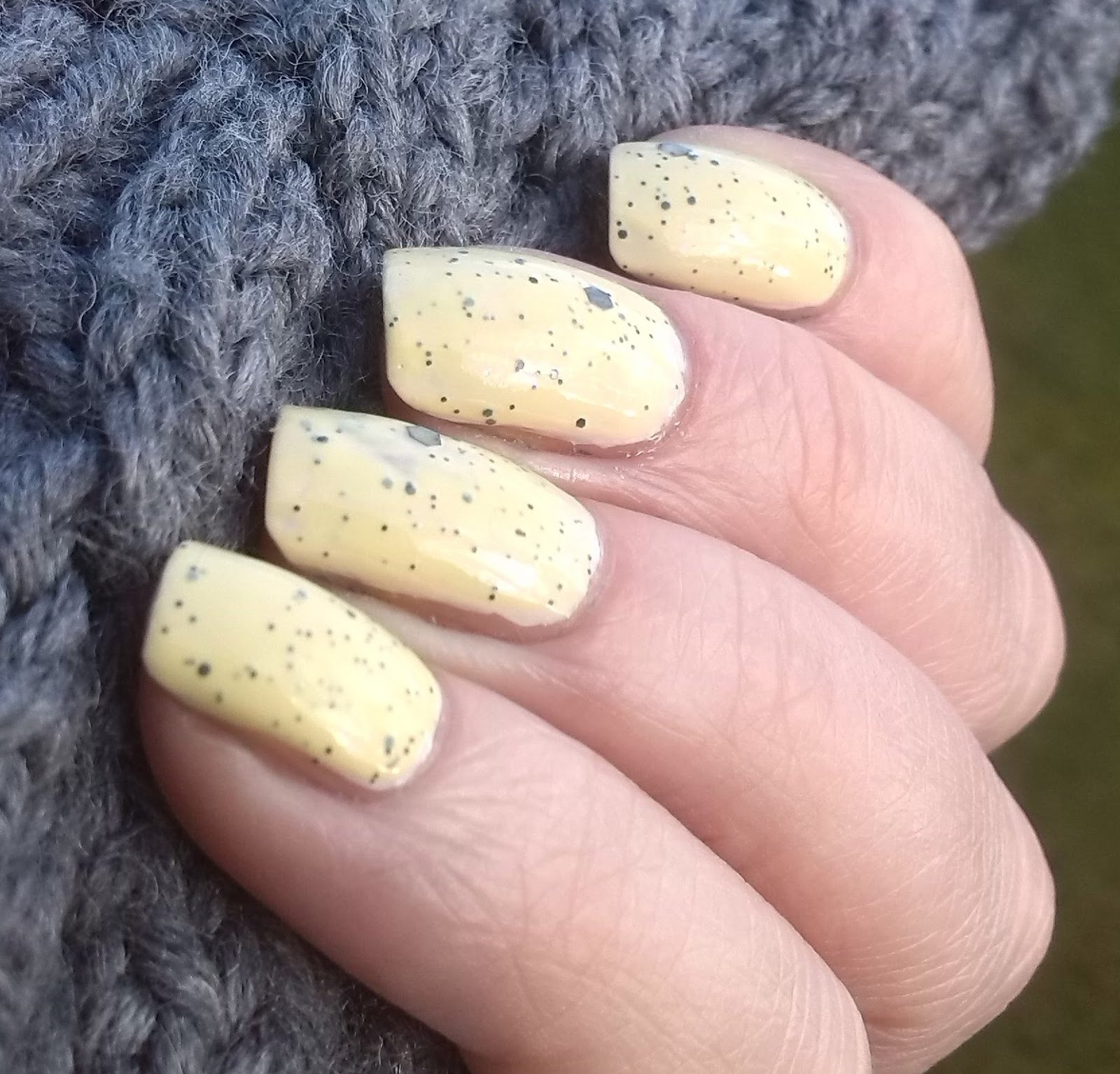 Look HERE to see what everyone else got up to

An InLinkz Link-up
Posted by debbie jarman at 02:41