I am late with yesterday's #30daysofcolourchallenge, mainly because I thought it would be a good idea to combine it with the #ukstampersapril challenge and I didn't have time to do both yesterday.
The #30daysofcolourchallenge was Vampy - I have a lot of polishes which would be fine for this challenge but I really wanted to use an untried so I have gone for another new one by UK Indie Danglefoot Nail Polish. We are in Dream Country Now is a red/purple jelly with lots of pretty red, gold, and orange glitter which is really sparkly.
When I finally decided I would try to wear red, it is these dark red, burgundy type shades that I started with and I love them! The glitter is an added bonus in this one.
I did need 3 coats for full opacity, I might well use a dark red base next time but the formula was good, polish dried reasonably quickly, despite my very cold hands.
The polish was very sparkly in the sunshine, but to be honest I think of these as more wintery shades and I liked it best in the shade. You can really see the depth of the glitters floating in the layers of polish.
The #ukstampersapril challenge was reverse stamping and with hindsight I think I made this very difficult trying it over a dark red base. It was a challenge to find a suitable colour to stamp with and to colour with. I don't think black would have shown up, white would be too much of a contrast so in the end I went for Mentality Beige Opaque which stamps as a gold. I think this went well with the glitter in the vampy base.
I chose the butterfly plate from Messy Mansion, MM42 and I coloured most of my butterflies with Above the Curve Tardis, a teal holo and China Glaze Riveting. I also had a few false starts with other colours that didn't show up at all well but in the end I think these are not too bad.
Note to self, make life easier - use a pale base!!! 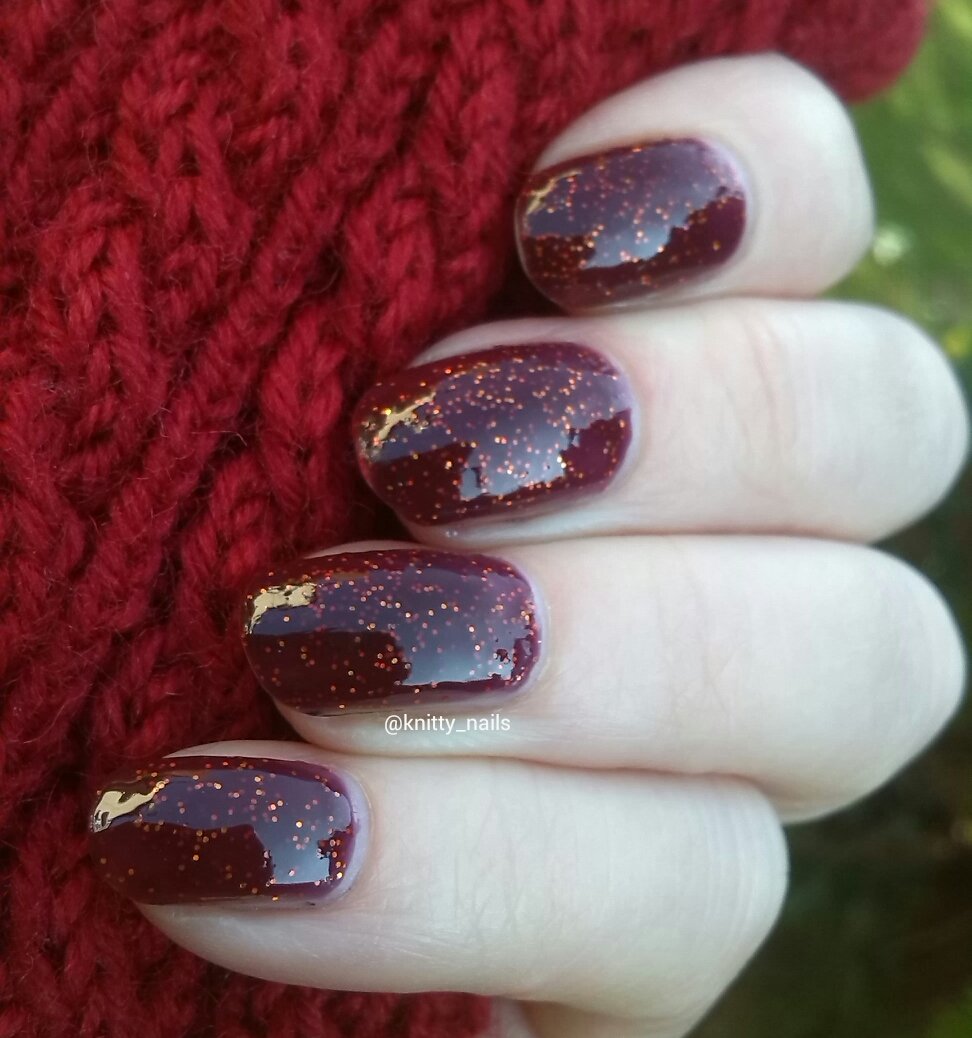 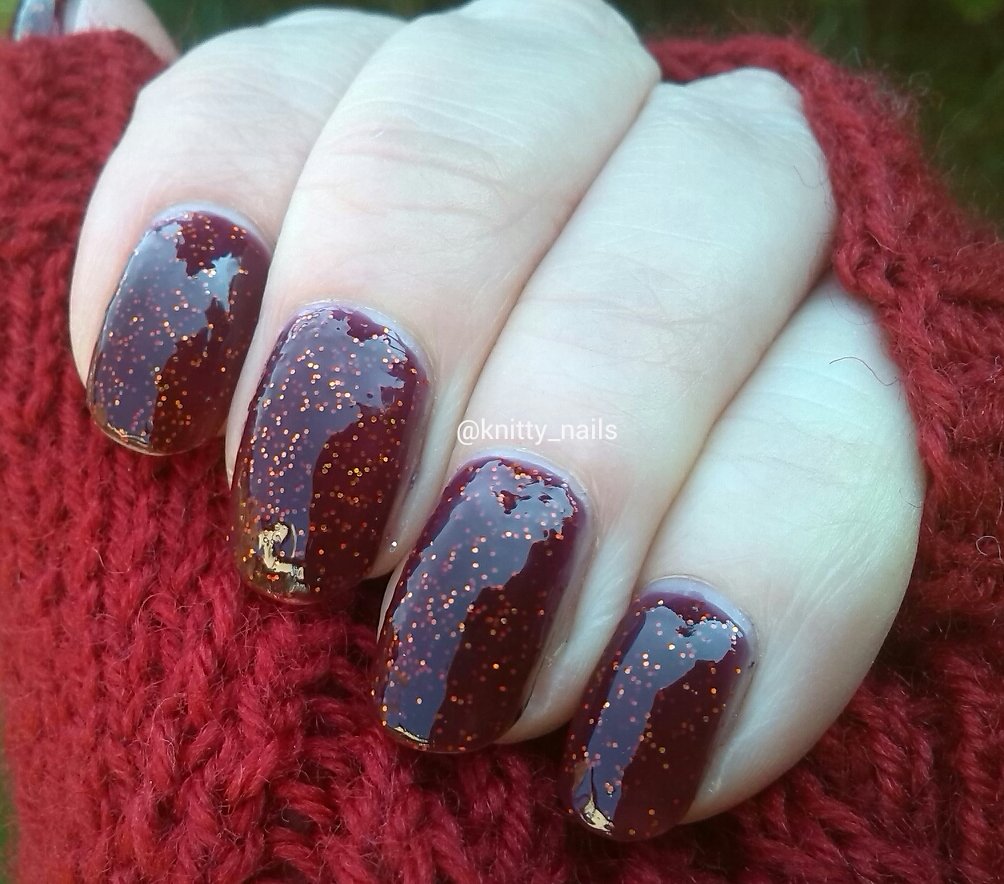 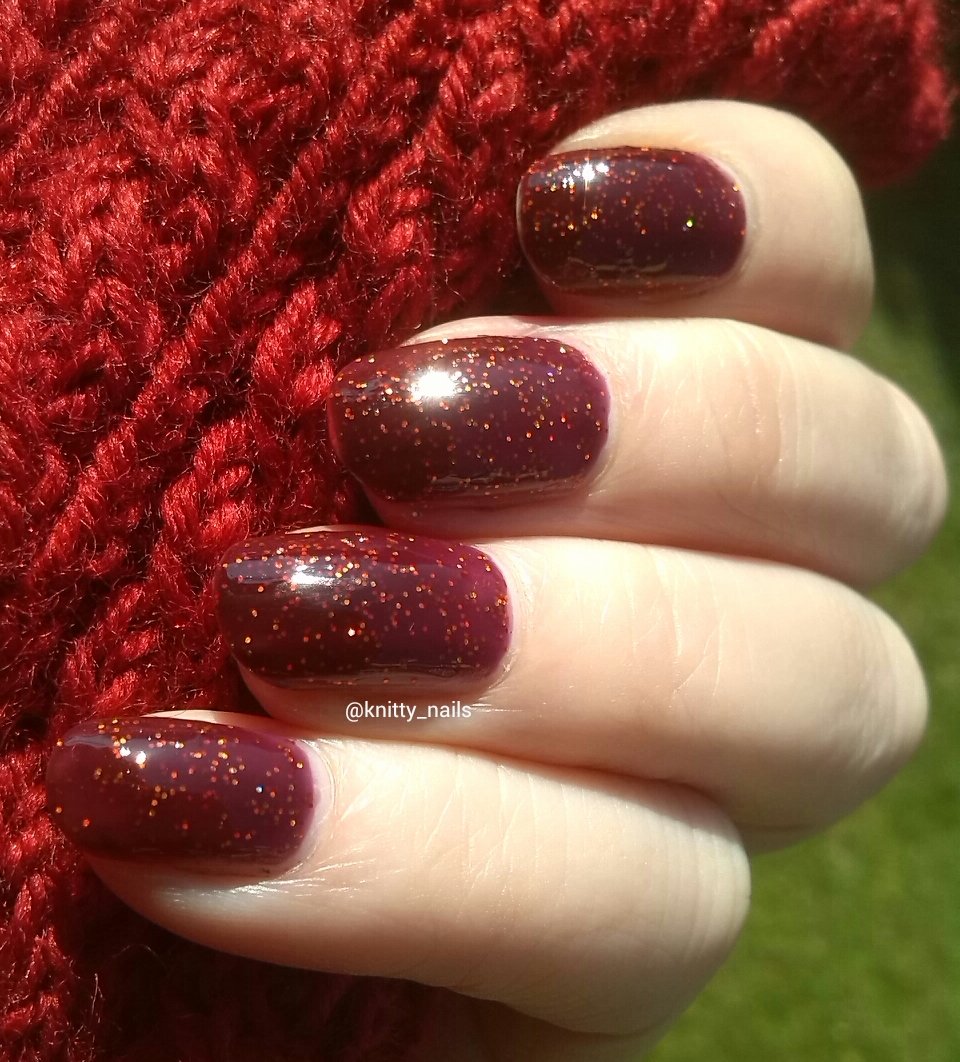 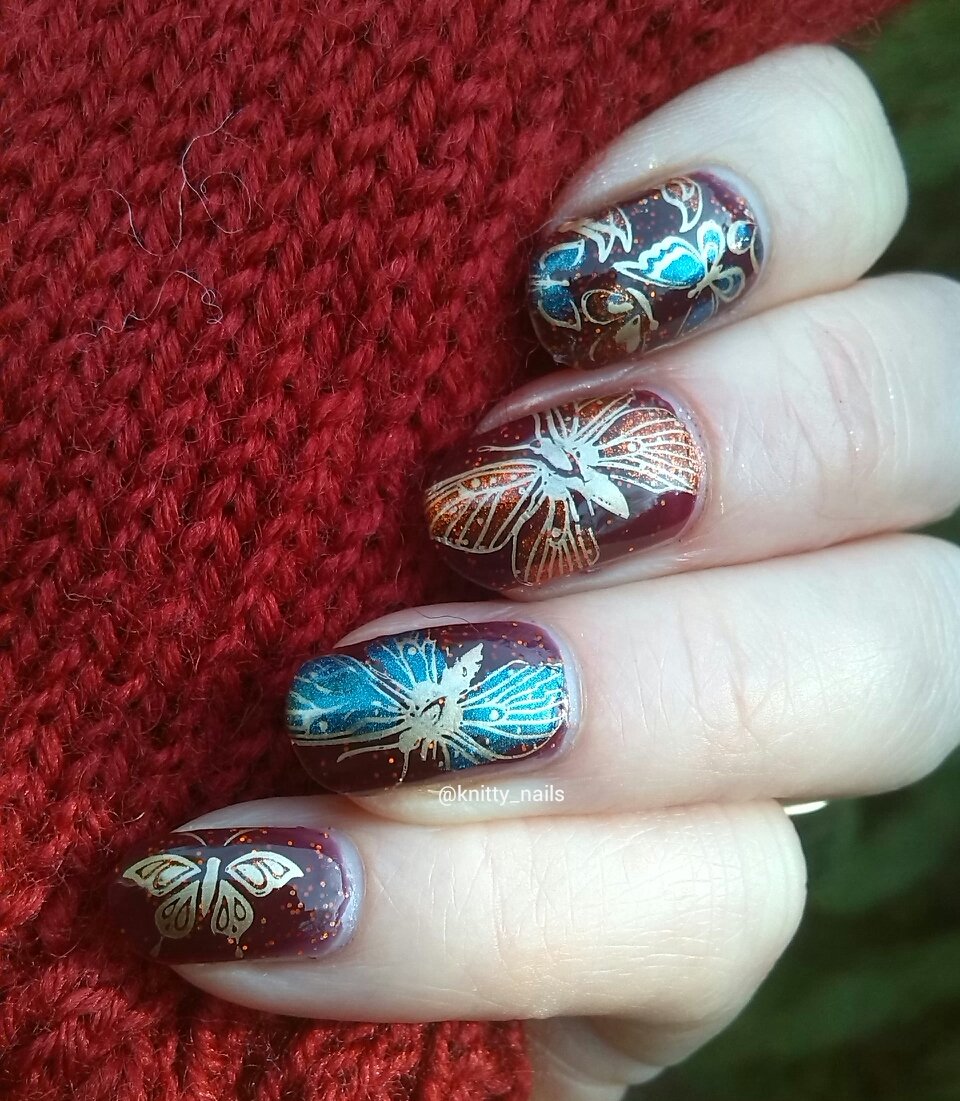 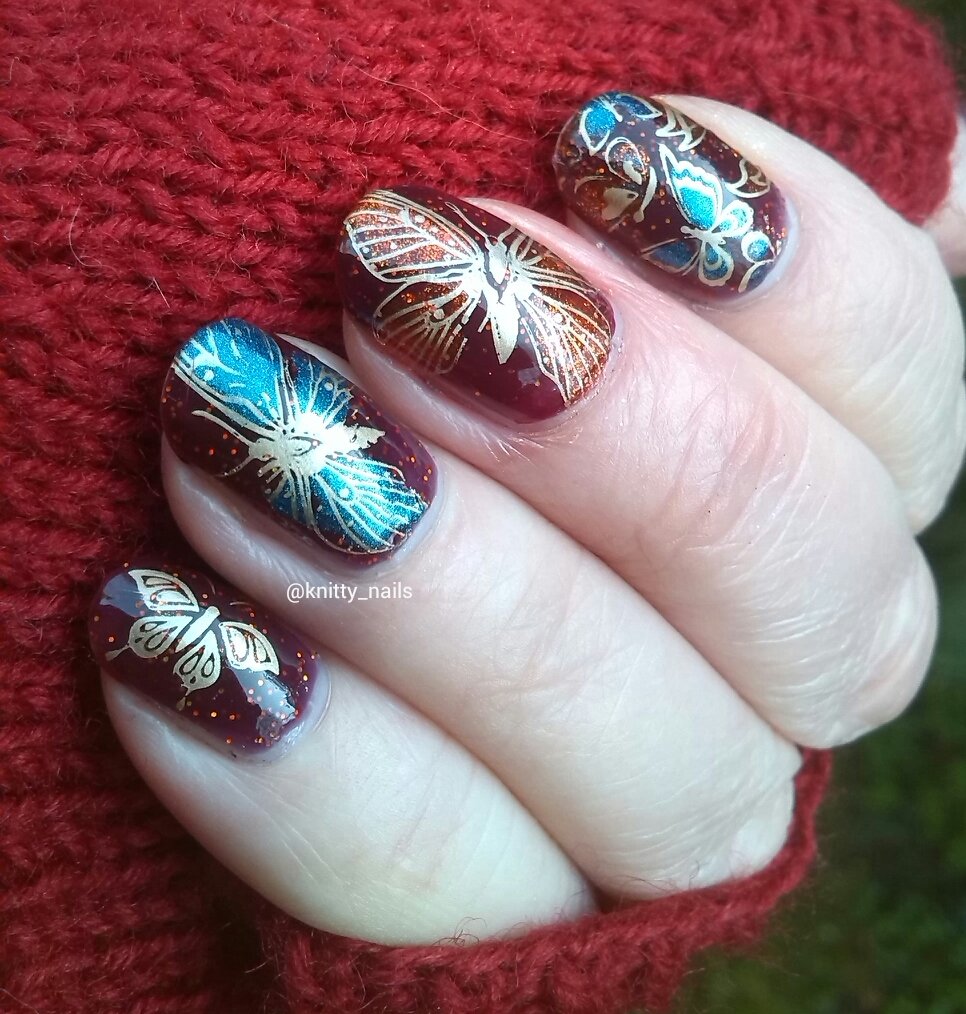 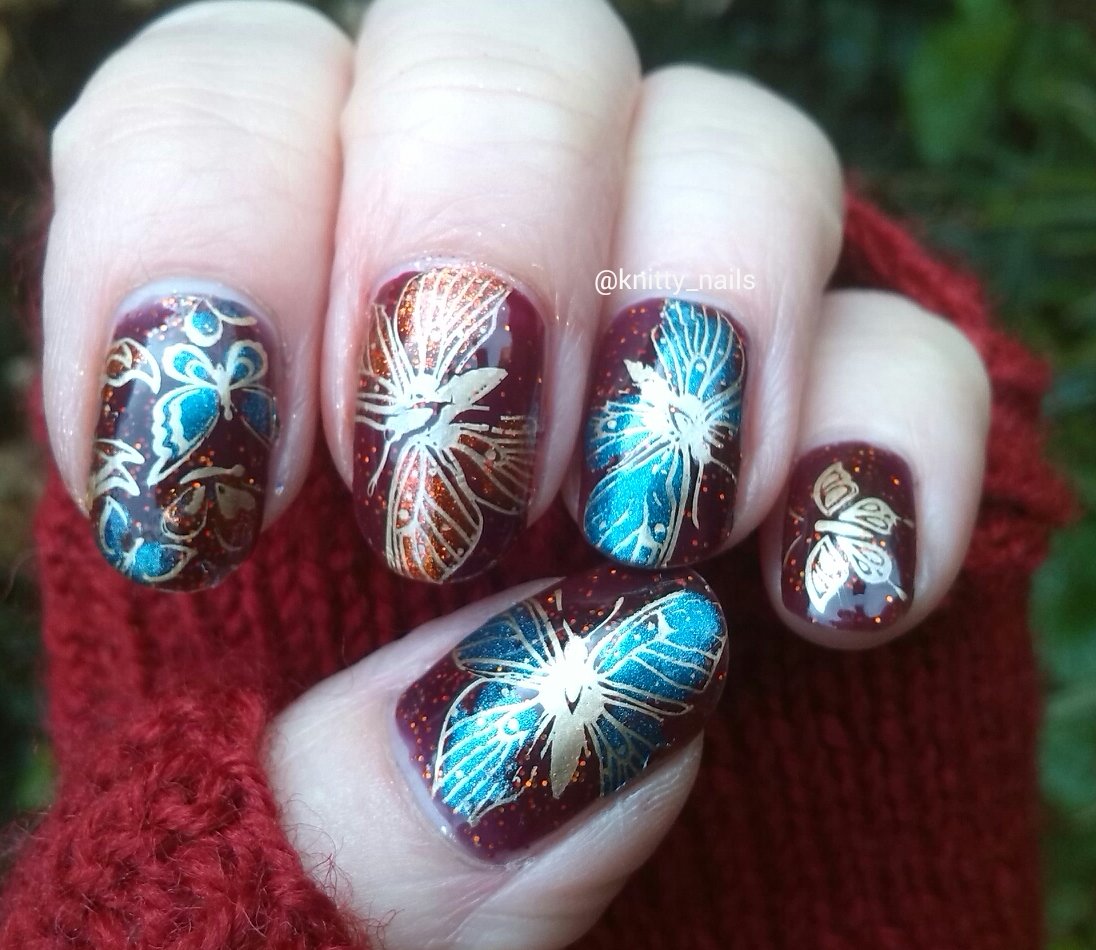 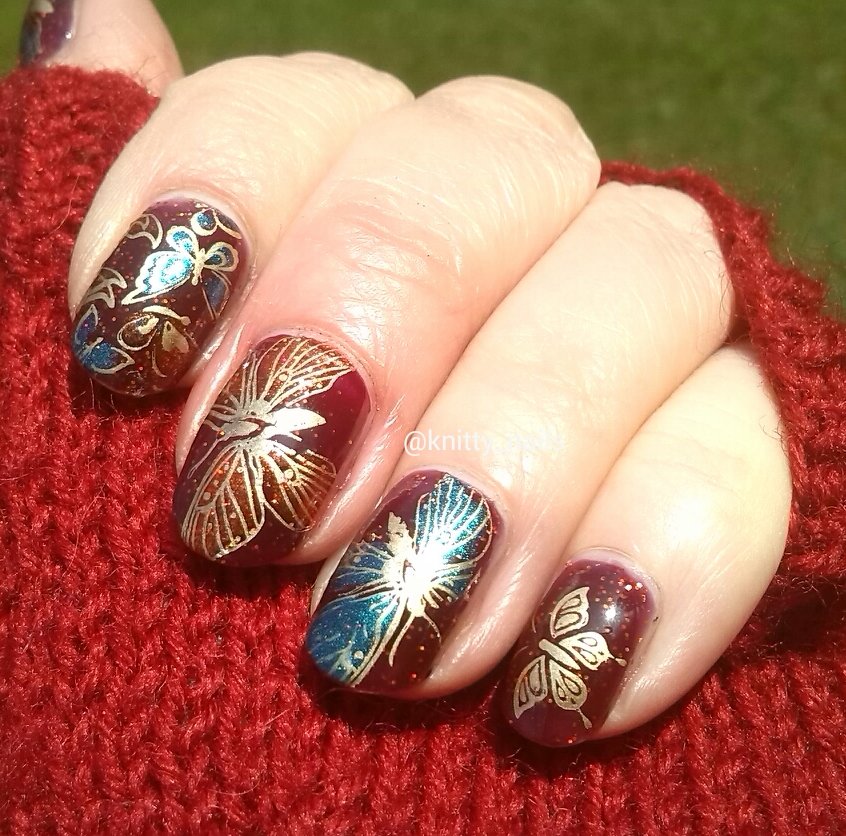 An InLinkz Link-up
Posted by debbie jarman at 08:35