It was Australia week in one of the facebook groups and I wracked my brain unsuccessfully for what to post, and then I had a cheeky flash of inspiration. I know it's the wrong "Aus", but I decided to post Leighton Denny's Brick Road. I don't actually know if my Brick Road is the old one or the new one that came out in the Friends of Dorothy collection. Since I don't like yellow, I wasn't that fussed either way and I only have the yellow in my collection because it was up for swap and my daughter wanted to try it.
So here it is, painted on nicely in 2 coats but it didn't really photograph too well, its actually more yellow than it looks here. I did give it the benefit of the doubt and took as much care as I could to do it neatly but no, woolly fans, I do not have any yellow knitwear or gloves. 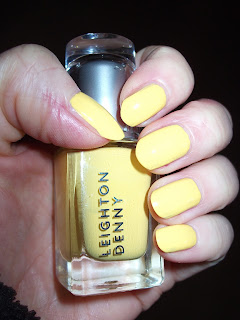 Then I had a little try of something I'd been thinking of for ages, the graffiti top coats add a new dimension to some colours that I would otherwise never wear, like white or pillar box red (never say never!), so still tongue in cheek, here is Brick Road, with Nails inc Brick Lane.
I like it better than just plain yellow, but it is still yellow! 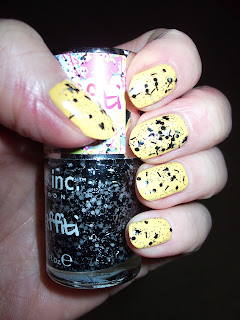