I am very pleased with the way today's nails turned out although they took so much longer than I expected. In my mind it went like this - paint the base, top coat, add the vinyls, paint using the multi-chrome, remove vinyls, top coat, done... erm maybe not.
I wanted to use nail vinyls that I'd bought from She Sells Seashells and I spent quite a while deciding what colours I would try. I didn't want a huge contrast and then it struck me - black and something that would look good over black - glitter? flakie? or... multi-chrome - the perfect opportunity to try I Love Nail Polish Birefringence. I knew that this one was a pretty powerful multi-chrome and I thought it would be strong enough for a good contrast against plain black.
I used Nails Inc New York Noir for my base, and added a top coat. I did wait a while before using the nail vinyls but I should have done the base the night before, it does need to be really dry. I then started to apply the vinyls, thinking that if I was going length-ways I would not have such a problem as I did when I did my Jack Wills style bold stripes. Actually the problem was pretty much the same, I found it quite tricky to apply the vinyl so that the stripes were parallel, they seemed to bow out in the middle, but to be honest when I'd finished that wasn't particularly apparent. Because I kept lifting them and replacing them there are couple of areas where the base coat lifted a bit.
I added one coat of Birefringence, carefully removed the vinyls and wow! this is some awesome multi-chrome! I added top coat and all the slightly smudged edges disappeared and there were these wonderful multi-coloured humbugs!!
Birefringence looks essentially bluey purple in the bottle, but it shifts from green, then teal through blue, purple, dark red towards orangey brown. Typically I couldn't capture the full range on camera, did manage to catch the rain drops though! Anyway, I captured enough to see the stunning effect and was delighted that the contrast between the multi-chrome and glossy black was clear enough to see.
I love what you can do with nail vinyls, I just need to practice and stay calm - these finished off way better than I thought they would as I was doing the mani. I do feel the need to say, the problems I had are not with the vinyls themselves - they are great if you use them properly!!
I think the end result with the length-ways stripes is actually quite elegant and I love the variation in colour against the black.
Lots of pictures taken over a couple of days but in the end I decided I was never going to catch the green :) 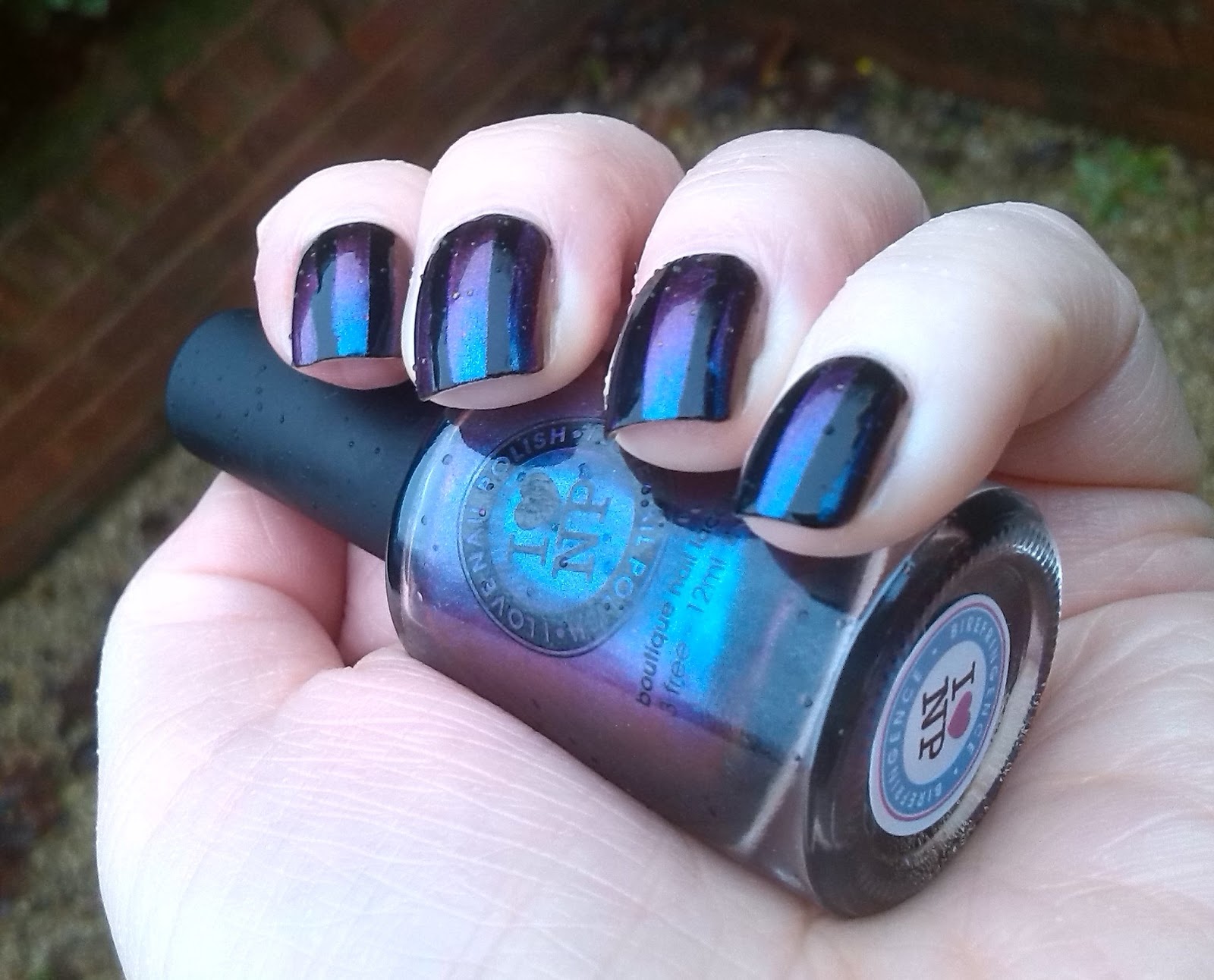 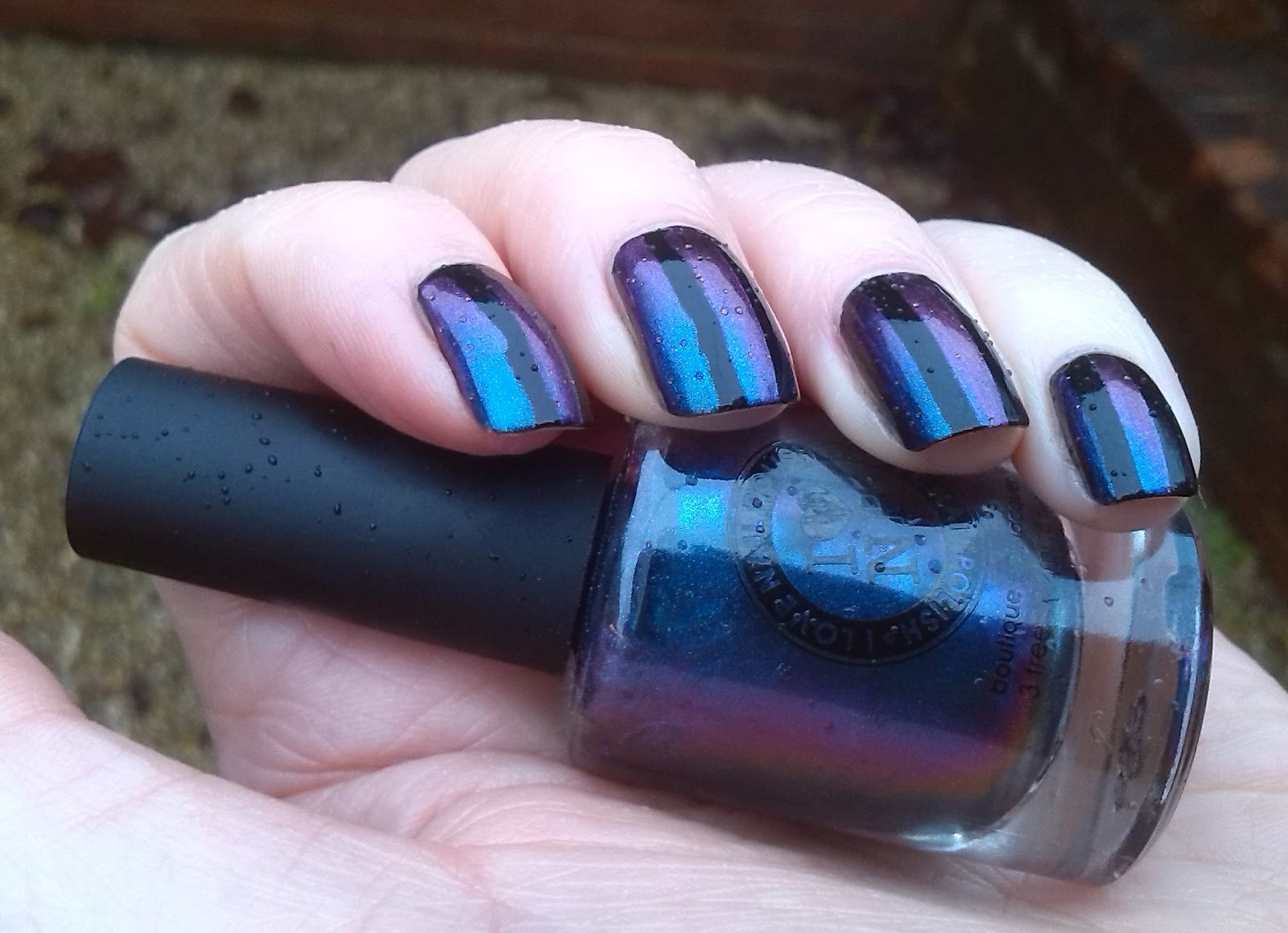 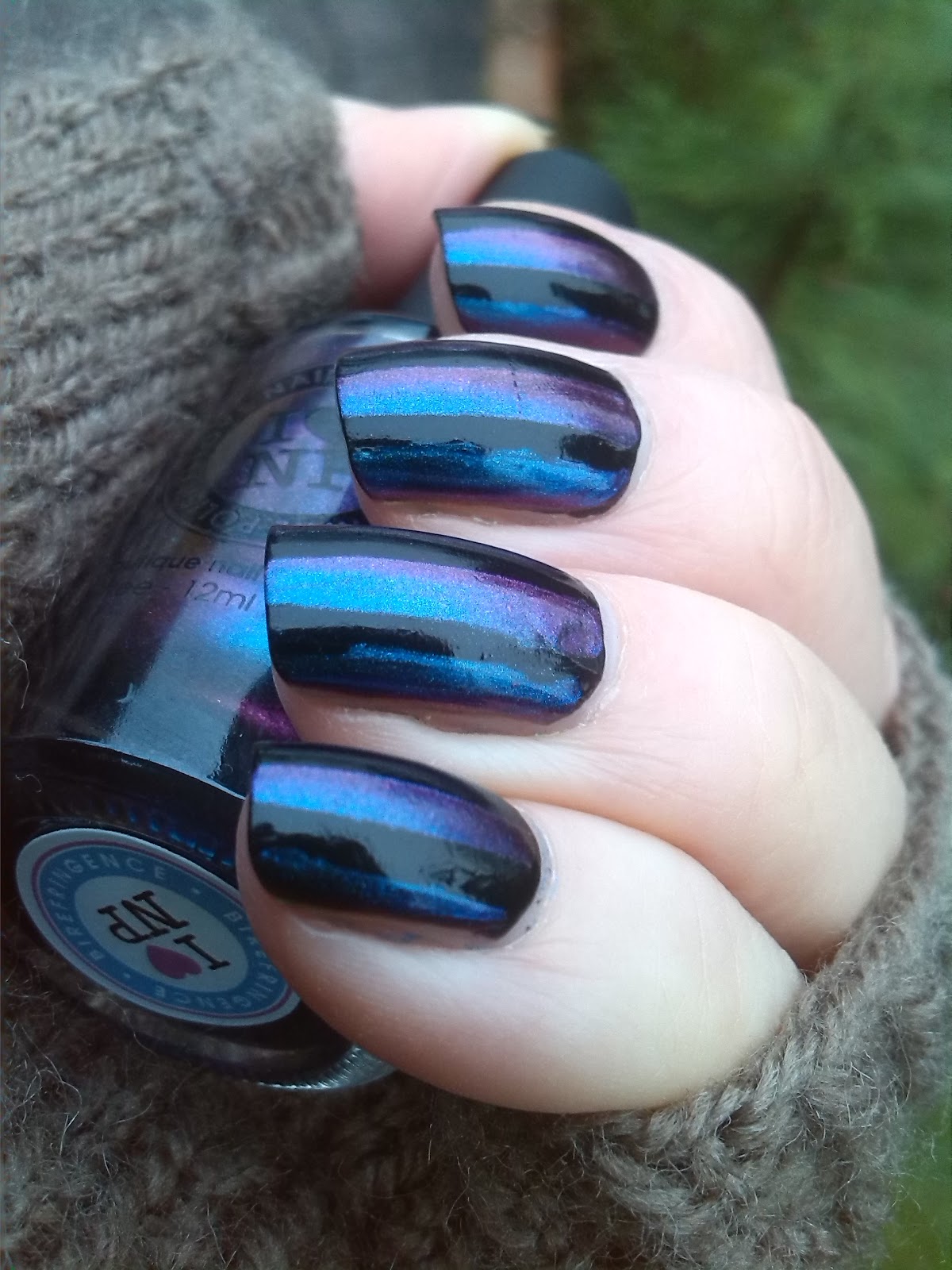 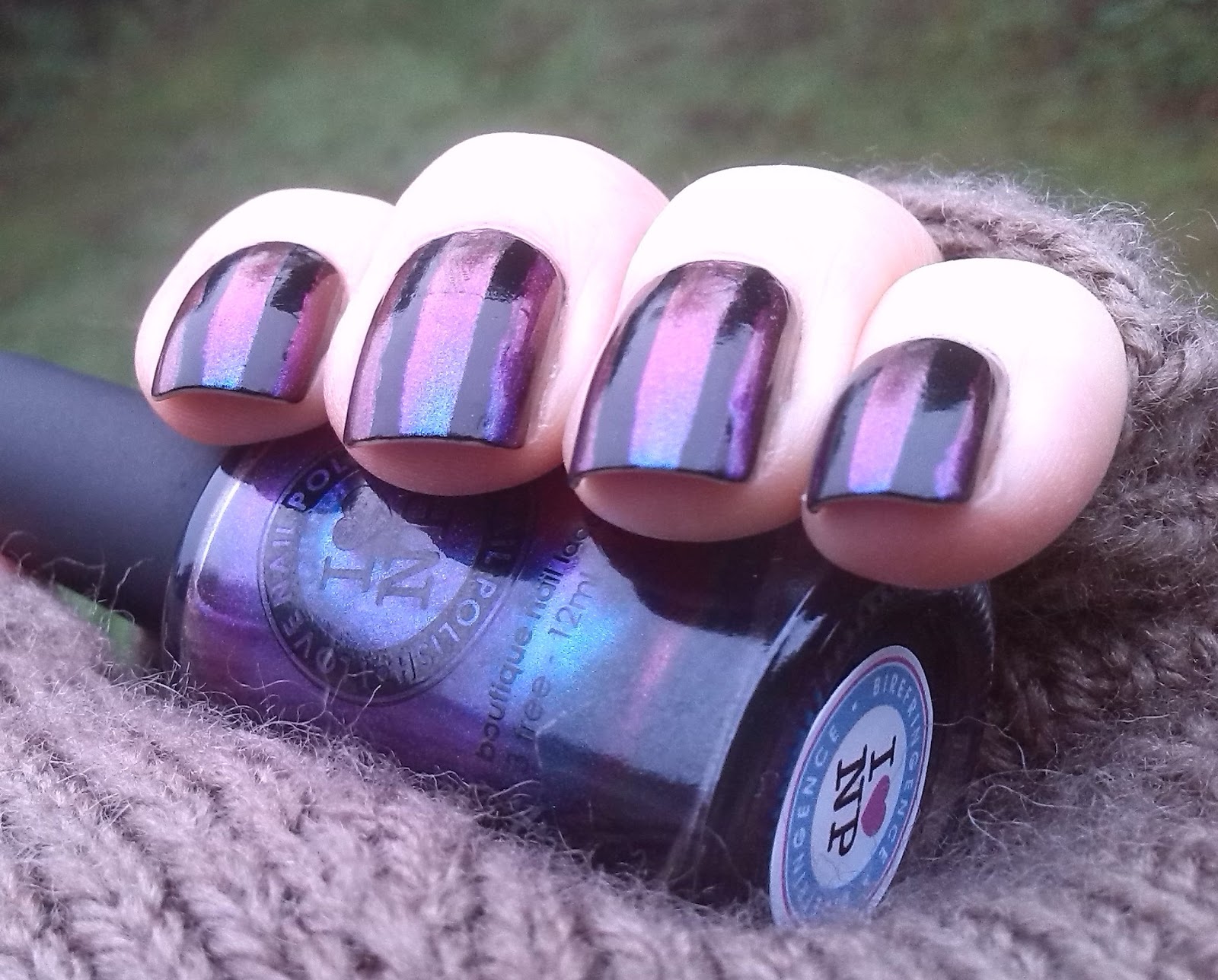 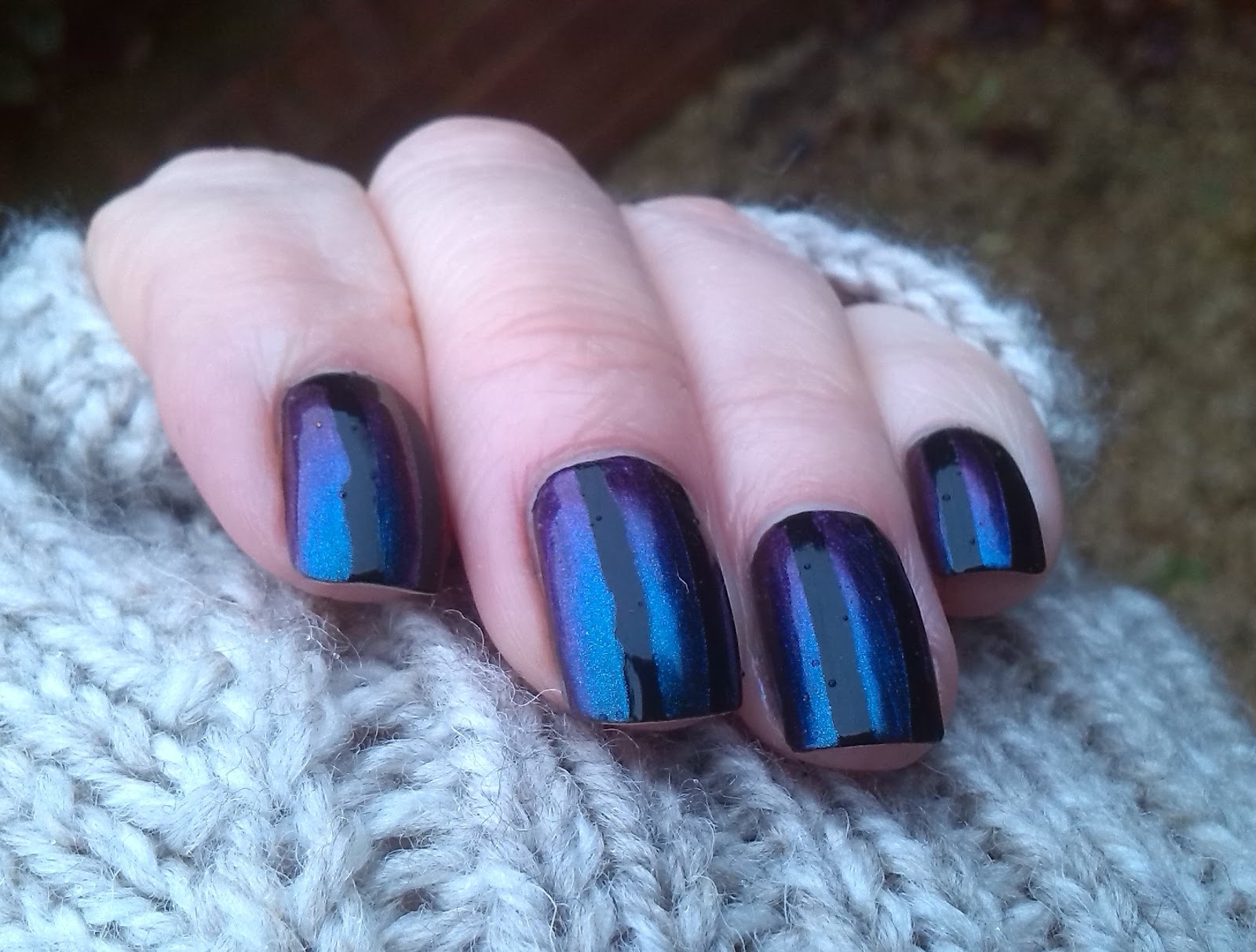 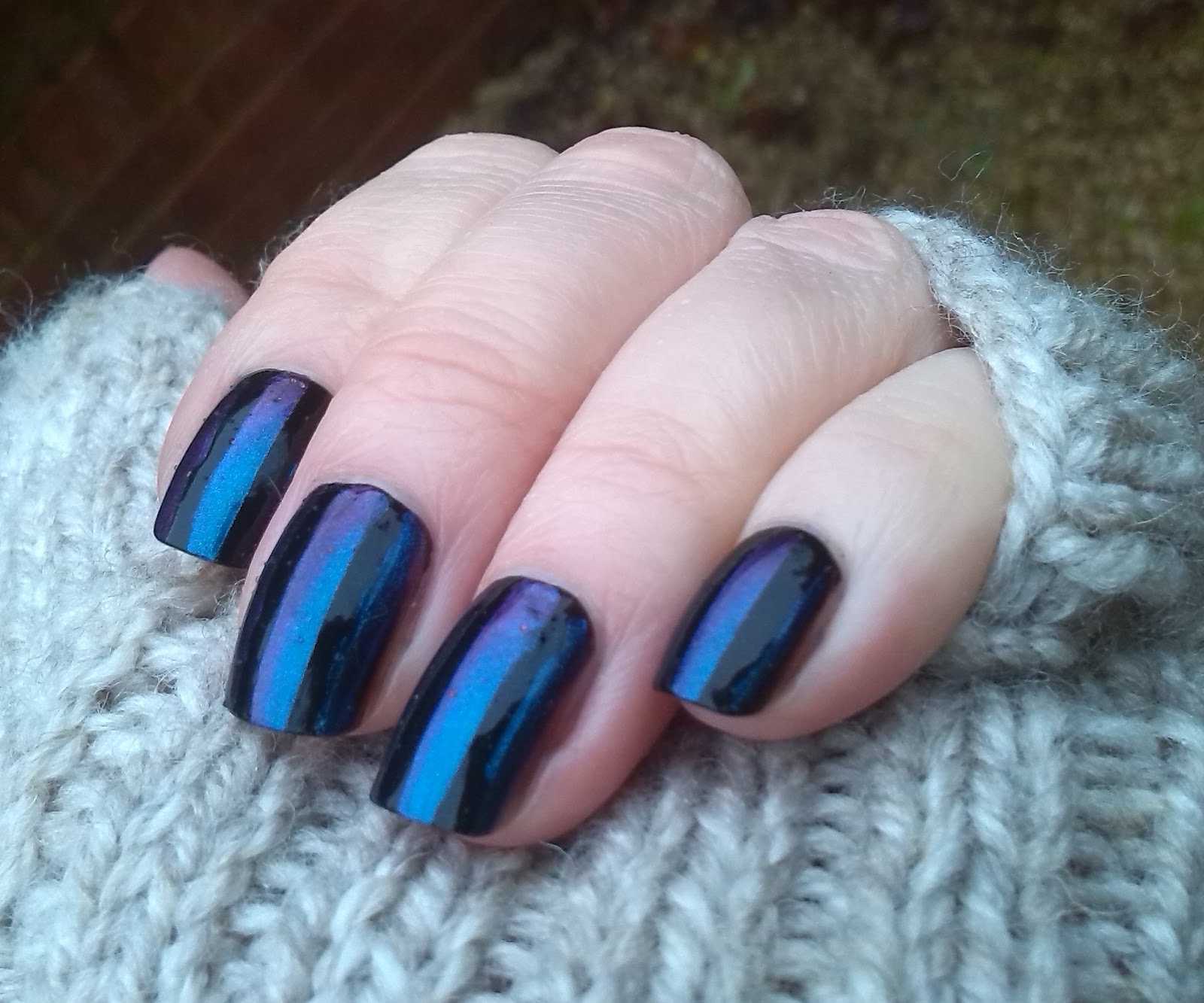 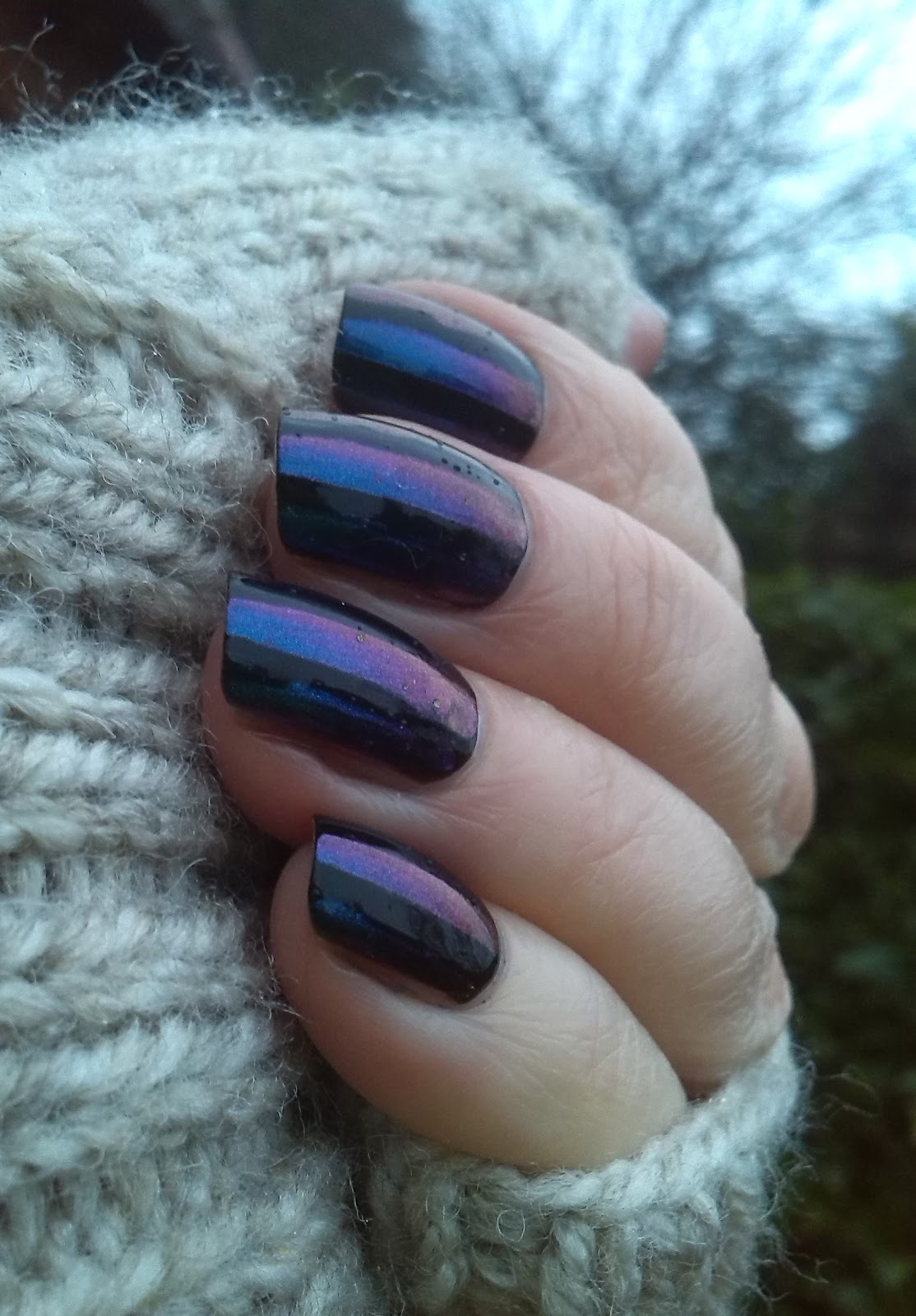 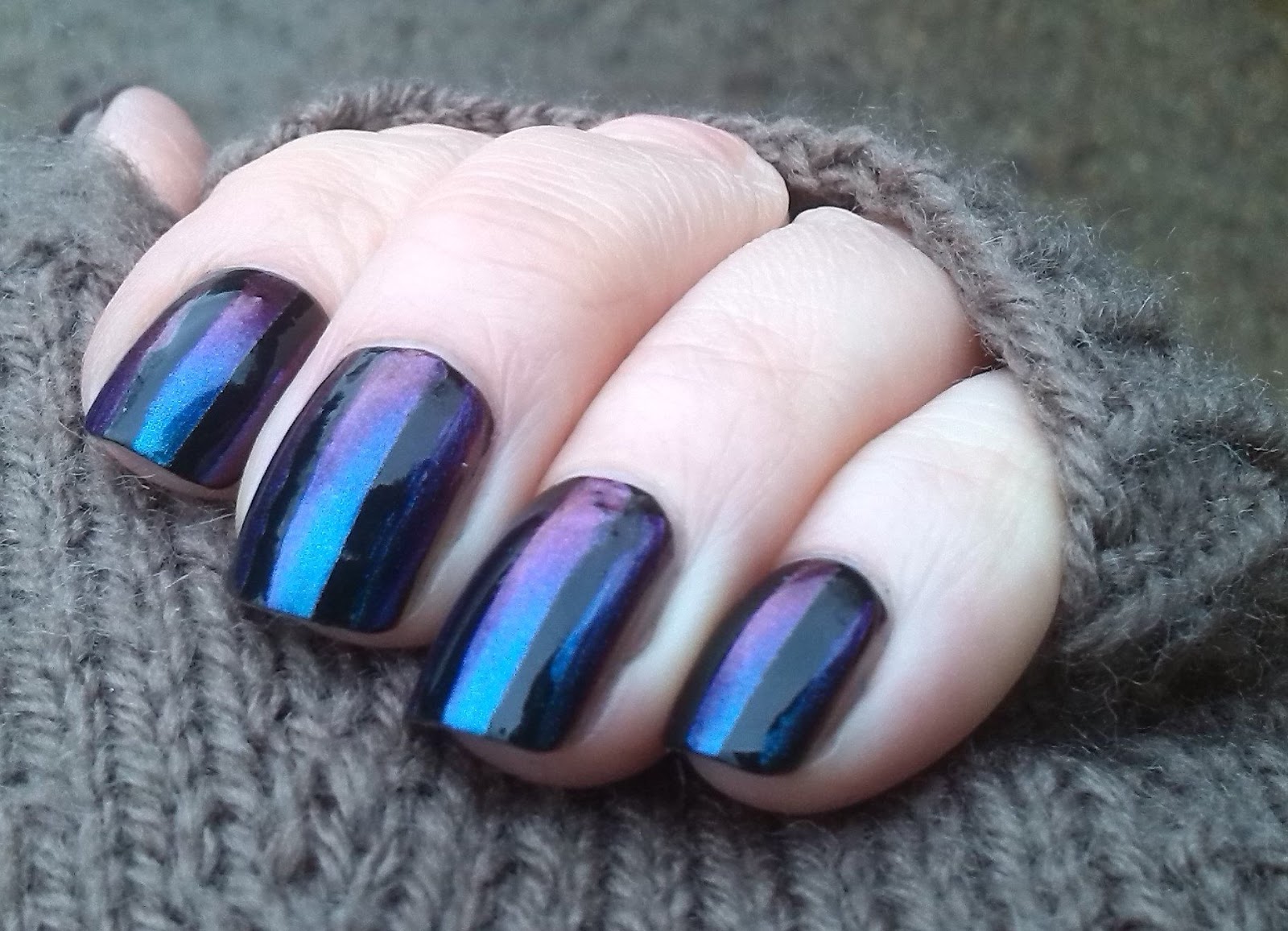 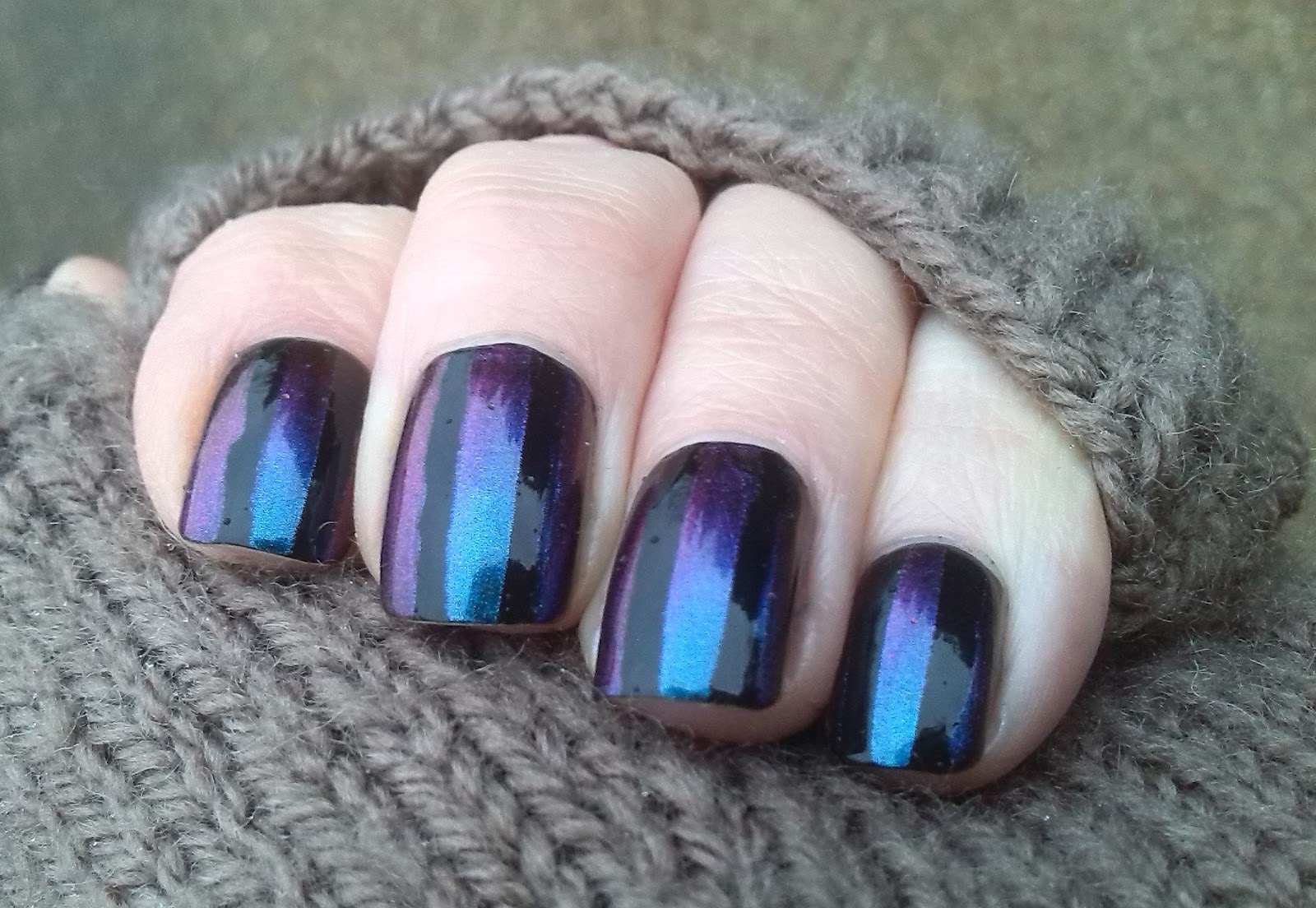 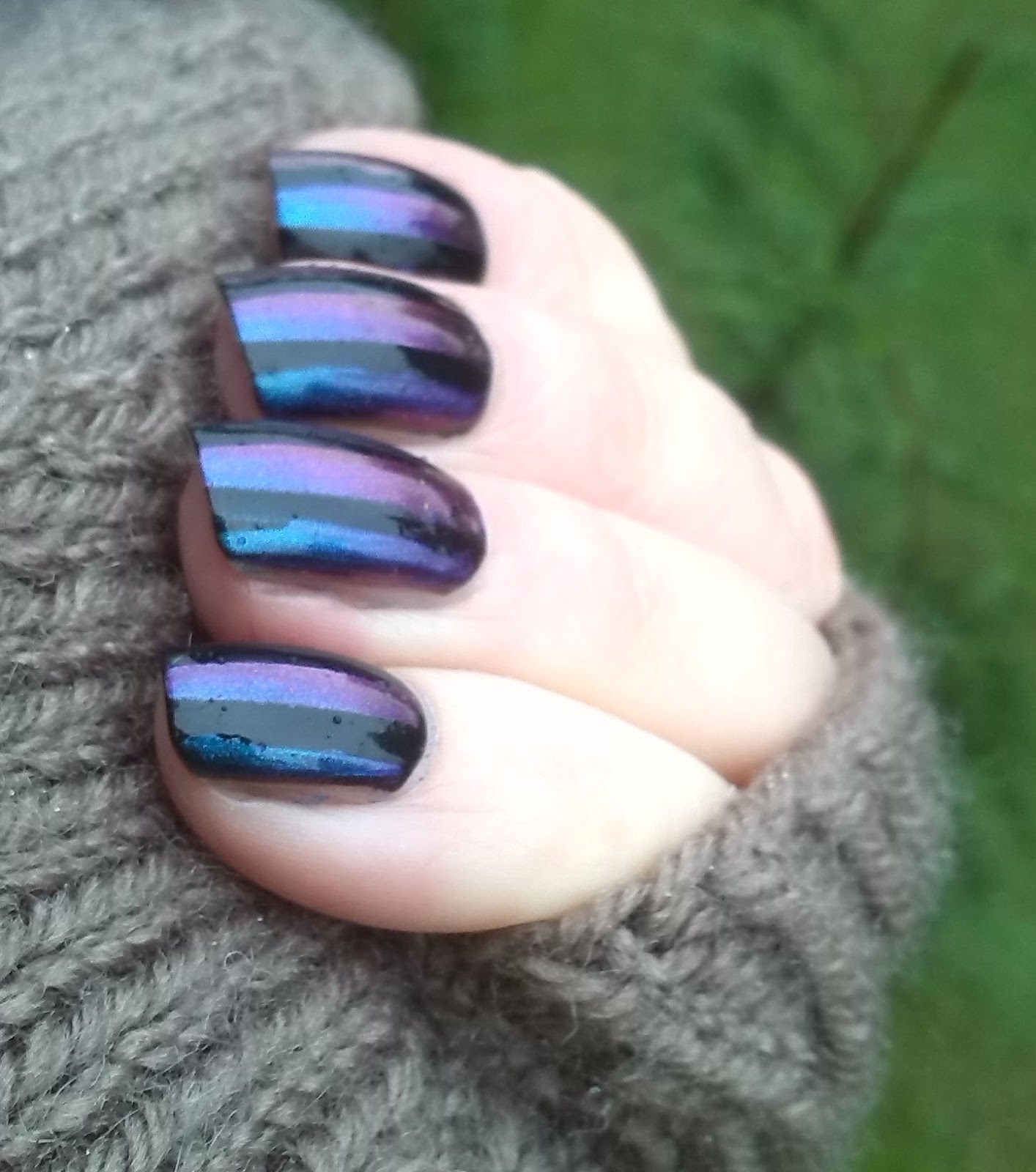 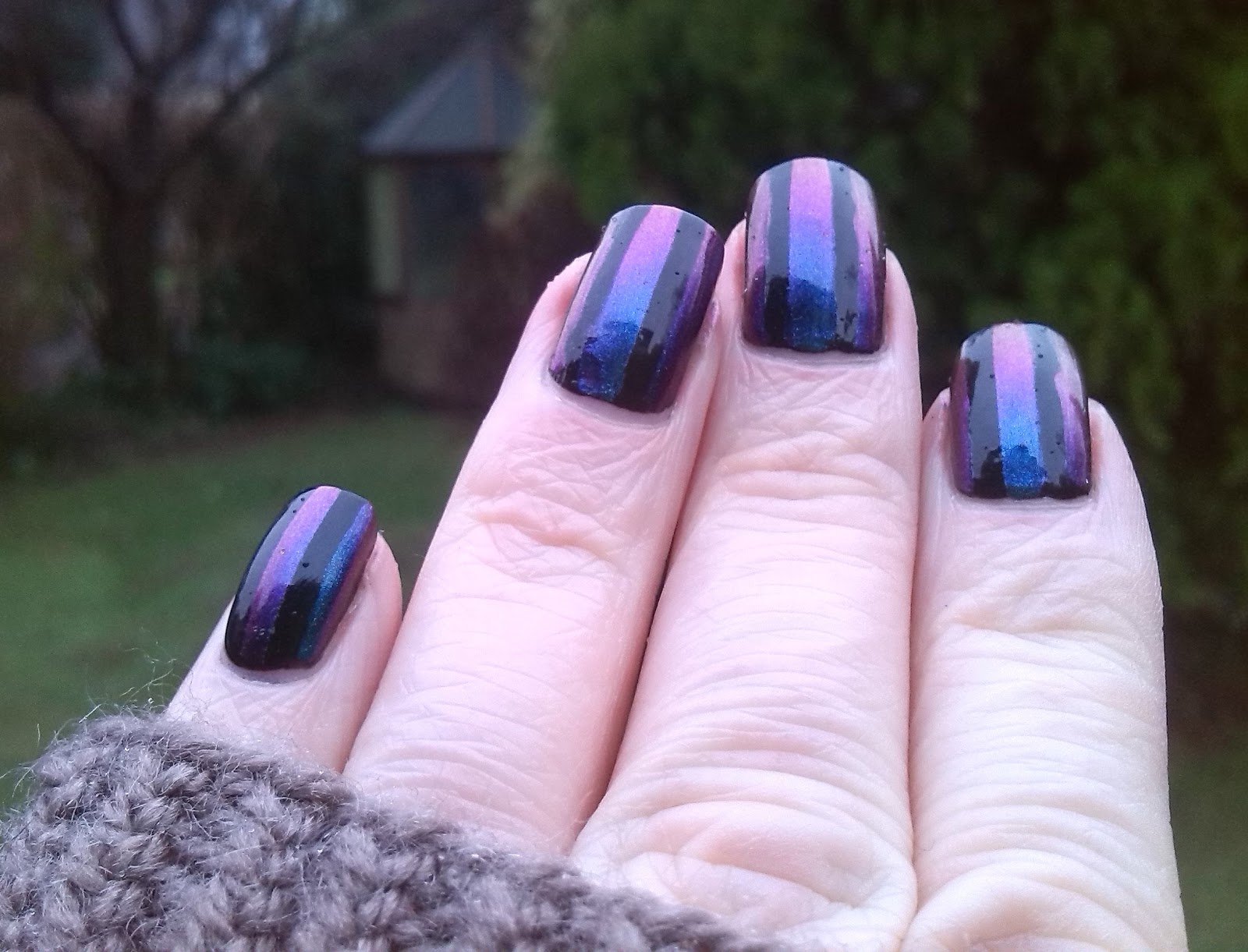